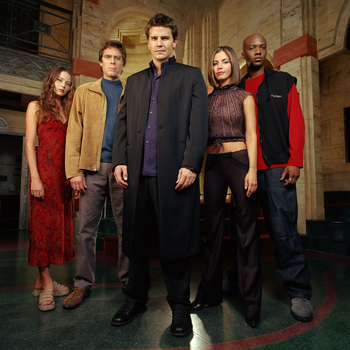 Atonement's a bitch.note Left to right: Fred, Wesley, Angel, Cordelia, and Gunn. Not pictured: Doyle, Lorne, Connor, Spike, and Harmony.
"Well, I guess I kinda worked it out. If there's no great glorious end to all this, if nothing we do matters... then all that matters is what we do."
— Angel, "Epiphany"
Advertisement:

Angel, a Spin-Off of Buffy the Vampire Slayer, aired on The WB Network from 1999-2004. Part melodrama, part Fantastic Noir, with a helping of comedy (a given for Whedon), Angel ran for a respectable five years but never quite escaped the shadow of its parent show.

The eponymous hero, Angel, is a troubled man who can't accept the bottom line on vampirism. (Killing people is in the job description.) A gypsy curse gave Angel his soul back — along with two centuries' worth of guilt for all the lives he's taken. On Buffy, Angel learned he could make amends for said crimes and left to pursue redemption on his own. He soon cobbled together his own West Coast Team (albeit on the same coast) and formed a detective agency to battle the forces of evil. And their lawyers.

The oddest thing about Angel is that the show changes quite a bit as the seasons move. Over the course of its run, the show experimented with Monster of the Week episodes laced with a hard-boiled, Sin City atmosphere, but later jettisoned it for something more akin to Urban Fantasy. The overarching plot became a meditation on the nature of good and evil, with Angel serving as an enigma on both sides. Characters have huge arcs that alter not just the plot but the way the story is told, and the last season is a wild transition even when compared to the previous season; by the fifth year, of the original starring cast of three, only David Boreanaz as the title character remained. That being said, several Buffy alumni wound up migrating to Angel, totaling out at four by series end. (Not counting numerous crossovers within the 'verse.)

Though the network cancelled the show abruptly during its fifth season, Joss and Mutant Enemy still had enough time to put together a Series Finale.

Angel, to one degree or another, greatly influenced Torchwood, which could be considered its British equivalent. Just compare the page images.

Angel's adventures continued in a comic named Angel: After The Fall, published by IDW. Its tropes can be found here, though that page is a work in progress. Dark Horse Comics currently publishes the latest continuation, an ongoing series with Faith called Angel & Faith.

Like its parent show, Angel contains loads and loads of trope examples: