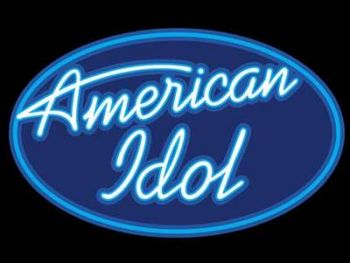 An American version of the British series Pop Idol, which is better known due to the fact that far more people live in America than Britain. In Britain, Pop Idol was also pushed aside for The X Factor. The X Factor came to the U.S. in 2011, with Simon Cowell. The Idol season that followed suffered the worst rating drop in the series' history.

It's also launched the "career" of William Hung, whose… slaughtering of Ricky Martin's "She Bangs" landed him a record contract, in which he did the same thing to several other pop "standards". So Bad, It's Good, indeed.

Another reason for the show's popularity is the chemistry among the three(?) judges:

One website nailed Paula's judging with the line "her ritualistic fare of generalized superlatives that highlight nothing specific about a performer." Simon, on the other hand, generally responds with either a verbal shrug ("It was good, it just wasn't great") or unabashed criticism ("I felt like I was at a high school musical"), so his rare superlatives actually mean something.

A great deal of the show's entertainment value comes in the first weeks, when one can watch all sort of untalented (and worse) singers warble their off-key "songs" at the four judges.

Still, the show has its detractors. Year after year, opponents try to either get a boycott of the show going or tried to sabotage it by putting the worst contestant in the winner's circle.

Their efforts never succeeded, though with Season 6's Sanjaya Malakar (who made it to 7th place) and Season 8's Danny Gokey (who made it into the top 3), they got closer than ever. However, by season 12's end, one rival site has succeeded.

In 2013, the site promoting the worst contestant shut down, though past versions remain accessible on the Internet Archive

The show was a veritable ratings behemoth, drawing 20+ million viewers on a bad day. To put it in perspective, President Barack Obama's speech on the state of Healthcare in September 2009 drew about 30 million viewers – on 10 different networks. The 2009 finale of American Idol drew 28 million viewers – on one network. American Idol alone cemented FOX as the top dog network in terms of advertising potential during its heyday. The network used the show as a lead-in to whatever show they wanted to boost – the most notable examples are House and Glee, which nearly doubled their respective viewerships and went from merely popular to megahits once they started airing in the post-Idol timeslot. American Idol was the highest-rated show in the U.S. from its beginnings to the 2004–2005 season. It started to slip in the 2010s, notably being beaten by rival show Dancing with the Stars on several nights in total viewers, and being beaten by The Big Bang Theory in 2013 whenever the two have aired new episodes against easch other. Its ratings continued to slide in the mid-2010s, eventually overtaken by NBC rival show The Voice, but for a time it continued to be a solid mid-season performer for FOX annually, especially when they were hurting for reliable shows post-House.

It's very likely that, in decades to come, this will be the show most remembered as what defined American television in the first decade of the 21st century. For better or worse.

. The series returned on March 11, 2018, once again with an entirely new set of judges, but nevertheless still hosted by the venerable Ryan Seacrest.