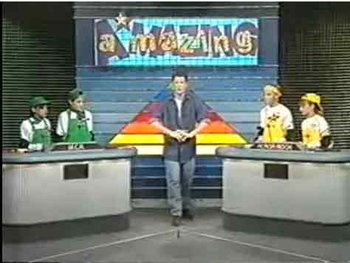 Australian kids' game show that ran on the Seven Network for four seasons (1993-98). The show had kids from different primary schools competing for points. Each day, two kids represented their school, with the aim of collecting as many points as possible for their school's final total, updated daily and revealed at the end of the week.

The show consisted of three rounds. The first and second round involved each team, separately, having to guess the answer to a what-am-I question from a series of clues given by host James Sherry in ninety seconds. Once the team had worked out the answer, they would then type out the answer on a giant keyboard, using their feet. The team was awarded one point for every second remaining on the clock when they finished typing. After a commercial break, the contestants would have to run through one of two mazes using the leftover time from the what-am-I question. Hidden in this maze were the letters that made up the word, and each letter was worth ten points. The process was then repeated so both team members could run the maze.

The third round was the Computer Challenge, in which contestants played Super Nintendo (later Nintendo 64) games competitively. The player who had collected the most coins/bananas/points was awarded 50 points, with the runner-up receiving 25.

The team with the most points at the end of each day's play then competed in the Key Run. Seven keys were hidden in the maze, each worth one hundred points. Contestants had 90 seconds (120 seconds in Seasons 2-4) to find as many keys as possible. There was always a Bonus Key which gave both members of the team a Nintendo Game Boy (later a Game Boy Colour).

After the Key Run, the points scored during that episode were added to the Leaderboard. At the end of the week, the winning team won their school a major prize, usually educational software.

A*mazing was easily the most popular Australian children's show of the 1990s, and holds a similar cultural significance in that country as Legends of the Hidden Temple and Nickelodeon GUTS do in America.