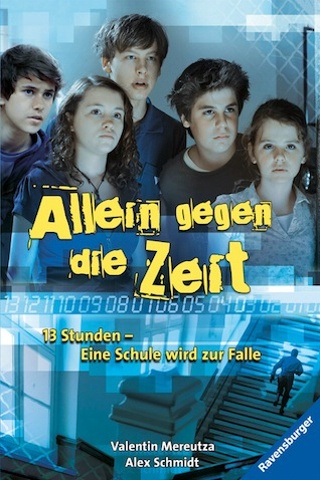 It's 24... IN A GERMAN MIDDLE SCHOOL! note from left: Ben, Leo, Jonas, Özzi and Sophie.
Advertisement:

It is set in and around the city state of Berlin, and focuses on the adventures of couple of students and their teacher of the Otto-Hahn-Gesamtschule (the Otto Hahn Comprehensive), located in downtown Berlin.

The series has two seasons with thirteen episodes each. It plays in Real Time much in the style of 24, so every (30-minute) episode covers one hour of the same day, and each season takes place in a time span 8 am to 8 pm.

In the first season, Ben, Leo, Jonas, Özzi and Sophie are attending detention class in their school on a weekend, with the only other people there being the Astronomy class making ready for a school trip, led by Dr Funke. That's certainly reason enough to consider it a bad day, but then things go From Bad to Worse; A group of terrorists takes over the building, booby-trapping all the windows and doors with electric grids and explosives, and takes the astronomy class hostage. Nobody knows what they came for and what their goals are, until they start calling out a certain Dr Michael Brehmer, who supposedly teaches Science at the school, and is Ben's father. The detention class, which went unnoticed by the terrorists, must find a way to escape the school and call for help. Ironically enough, escaping the building turns out to be the easiest thing...

The story is continued in Season 2, which is even Darker and Edgier, where the main 5 win a free ticket to a Jet-sky ride at a lake just outside of Berlin, but instead they end up stumbling upon a dying man in a nearby forest, who warns them that everyone will die unless “they” are stopped. A short time later, Ben gets abducted by a group of thugs who hide out in a former Soviet military base, which is owned by a suspicious pharmaceutical company...