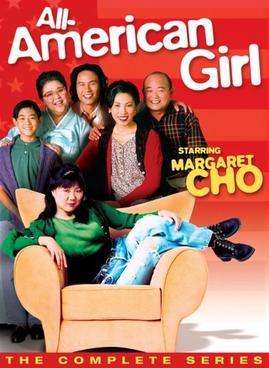 All-American Girl was an ABC sitcom starring Margaret Cho that aired for only one season in 1994-95. It is notable for being the first American network sitcom to feature an Asian-American family. It featured Margaret Cho (playing Margaret Kim) as a young college student living at home with her Korean family: her father (Clyde Kusatsu), mother (Jodi Long), two brothers (B.D. Wong and JB Quon), and grandmother (Amy Hill).

The sitcom pretty much hit on every overused sitcom trope there was, with a dash of commonly known Asian stereotypes. The show was not well received throughout its run critically or ratings-wise; the only positive reviews were of Cho's acting and charisma and her relationship with her grandmother. Towards the end of the first season, the producers attempted a retool to turn the show into more of an ensemble show with Cho moving into an apartment with three male roommates (one of whom being played by Diedrich Bader) titled Young Americans, but ABC lost faith in the series and it was then canceled.

The show's promotion and production was not a great experience for Margaret Cho; she had to radically tone down her edgy comedy act as part of headlining a mainstream sitcom. She had no creative control over the series, in stark contrast to other female comics to headline ABC shows, like Brett Butler, Ellen DeGeneres, and Roseanne Barr. She was also "encouraged" to go on a crash diet, which caused her to lose 30 pounds in two weeks which later led to kidney failure and years-long health issues. The cancellation of the show caused her to go into a depression, compounded by drugs and alcohol. Fortunately, she got sober and would eventually have a Career Resurrection.

Despite the initial reception of the show, the attempt to even have a show that primarily focused on an Asian-American family is still respected. And then after 20 years, ABC would try again with Fresh Off the Boat, to considerably more success. Cho acted as an informal consultant during the show's early development; the first season of the show, set in early 1995, pays homage in one episode when the characters are watching All-American Girl.

Not related to the Meg Cabot novel All-American Girl or The CW series All American.