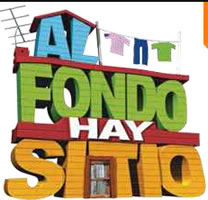 Al Fondo Hay Sitio (There Is Room At The Back) is a 2009 Peruvian TV series, created by by Efraín Aguilar. It is a Comedic Slice of Life that deals with the problems of social differences and economic status.
Advertisement:

One of the most exclusive areas of Lima, "Las Lomas", is shaken up by the arrival of the Gonzales family from Huamanga. The family settled in a half-built house they inherited. Their peasant traditions infuriate the neighbors, especially the family living opposite them, the Maldinis. The Maldinis are the richest family in all of Las Lomas, who decide to get rid of the newcomers. Hilarity Ensues combined with a secret that has involved both families for years...

The original run lasted eight seasons from 2009 to 2016, with a grand total of 1583 40 or so minute episodes, which made for an hour of programming considering ad breaks (with the exception of the 90-minutes long series finale). While a continuation seemed impossible for a long time due to all of them moving to other projects (and some behind the scenes issues), a good part of the cast and writers reunited to make a ninth season, currently on air since June 23, 2022.