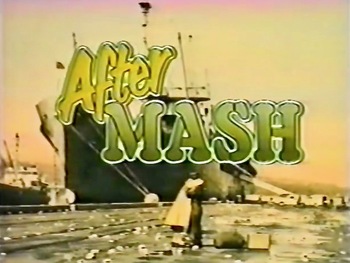 A long long time ago — After M*A*S*H but before AfterMASH....
— Family Guy (the opening crawl to "It's a Trap!")
Advertisement:

AfterMASH was a short-lived follow-up to M*A*S*H that premiered on CBS in September 1983, just months after its parent series ended. AfterMASH followed Colonel Potter (Harry Morgan), Klinger (Jamie Farr), and Father Mulcahy (William Christopher) to a Veterans Administration hospital in Missouri, and picked up where M*A*S*H left off there.

The show aired for two seasons, but after failing to catch on with viewers even after a second-season Retool it was cancelled in 1983; the last episode was never aired.

Another attempt at continuing the M*A*S*H storyline, called W*A*L*T*E*R and focusing on Walter "Radar" O'Reilly joining the St. Louis police force after he loses his family's farm, had its pilot aired in-between seasons of this show before sinking without a trace. The pilot was the only episode produced for the show and has fallen into obscurity.

Counts as a Sequel Series and a Spin-Off, but also as the Trope Namer for After Show.