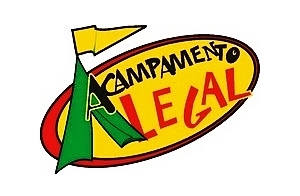 Acampamento Legal ("Cool Camp") is a Brazilian television series produced by Casa de Vídeo and shown by Record TV between August 13, 2001 and April 19, 2002, in 180 chapters, replacing Roda da Vida and being replaced by the extension of Cidade Alerta, ending the dramaturgy of the channel at that moment. It was written by Márcio Tavolari, Edison Braga and Armando Liguori and directed by Edison Braga.

Júlio (Clóvis Gonçalves), Estela (Salete Fracarolli) and Joana (Sílvia Menabó) are three brothers who had no idea what to do with the family farm inherited after their parents' death, since none of them had any contact with the field for many years. Tatá (Márcio Ribeiro), cousin of the three, suggests that they create an interactive camp, in which parents could safely leave their children after school and in which the children would do various sports and artistic activities, calling it Legal Camp. The monitor Zé Carlos (Armando Aliguori), the caretaker Benê (Ivan de Almeida), the forest guard Bob (Rodrigo Lombardi), the cooks Chica (Cleide Queiroz) and Landa (Paixão de Jesus), the cleaning lady Cândida, start working on the site (Ju Colombo), the sports instructor Caco (Fábio Di Martino), the music teacher Curió (Luiz Carlos Bahia), as well as Nelsinho, teacher of children at school and tutor.

The first child to arrive at the place is exactly the sweet Leo (Natália Garcia), Julio's daughter with his ex-wife, Dolores (Patrícia Pimenta), an arrogant van who only thinks about money and does not understand the fact that his daughter likes life simple field. It is with the arrival of Zezé (Luah Galvão) that everything changes. The girl becomes a prefect of the place and a great friend of the children, who do not even imagine that she is, in fact, a witch who ran away from the sisters Odisséia (Valéria Sandalo) and Oriléia (Vera Kowalska) for wanting to be good. Along with Clara (Talita de Oliveira), Bento (Diego Montez), Marga (Agata Kissa), Leila (Amina Karoline), Tati (Jessica Carvalho), Felipe (Robson Barbosa), Josiel (Lohan Brandão) and PJ, (Paulo Igor ), Leo will live great adventures that all the magic of the camp can provide.

The series is best known for the Troubled Production that ended up causing the series to end prematurely without an ending.