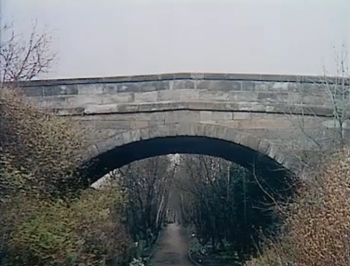 Stoneybridge: We're games if you are!note There is an actual Stoneybridge in Scotland, on the isle of South Uist, but the team were unaware of it when they wrote the show, which places their Stoneybridge near the Yetts of Muckhart, which is a real place in Clackmannanshire. The bridge seen in the photo used in the show is in Edinburgh.

Absolutely is a British Sketch Show which ran between 1989 and 1993. It owed something of its style to Monty Python's Flying Circus (consisting of six writer/performers, weird animation sequences and sketches running into each other), but relied more on recurring characters than the Monty Python team did. Although it was never a particular ratings winner, it is still fondly remembered and can, in retrospect, be seen as a forerunner to similar character-based sketch shows such as The Fast Show and Little Britain. The six performers were the Scottish Jack Docherty, Gordon Kennedy, Moray Hunter and Peter Baikie, with the Welsh John Sparkes and the (honorary Celt) Cornish Morwenna Banks.