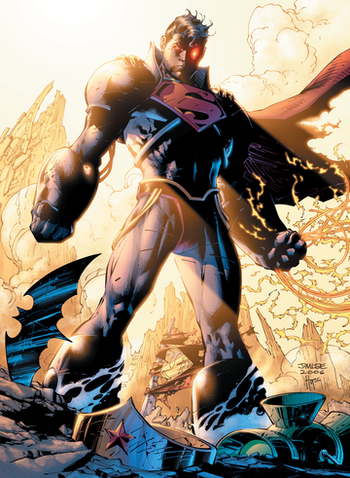 Not a hoax. Not a dream. Not an imaginary story.
Advertisement:

Finally I got my own page here on TV Tropes! Bout damn time, am I right? My name is Clark Kent but you no doubt all know me as Superboy-Prime, and I'm the greatest superhero EVER!

I came from Earth-Prime, an Earth where all superheroes were just fictional characters. I was just like any of you, I had a normal life, a girlfriend, best friends, and went to high school. Somewhere along the line, I found out one day I'd developed powers exactly like Superman's. Still not sure how that happened. So, natch, I decided to to become a real-life Superboy! But all of that went to hell thanks to the First Crisis that ended up. Since I'm awesome and brave, I helped other superheroes, including my idol Superman to stop Anti-Monitor, to save the whole of creation. Am I a saint or what? I was saved by Alexander Luthor Jr. from Earth-3 and we were dropped into a "paradise" Pocket Dimension, along with Superman and Lois Lane from Earth-2. You'd think we'd gotten a Happy Ending for all our efforts, right? Yeah, well, this's comic books, dudes. Good times don't last.

Because of all those years of solitude, missing my Earth, and watching as the superheroes who inherited the new reality weren't doing great, if I'm being honest. Things weren't the same. Heroes weren't bringing hope. They were at odds with each other, Superman and Batman especially. I started getting antsy and frustrated. Especially that emo imposter Conner Kent! That guy has it made! I would've given anything to have what he has, that selfish, half-assed loser! Eventually, Alex and old man Supes finally agreed that we had to do something about it. So, when the Second Crisis started, we took the first chance we got and busted out of our prison dimension. Alex helped orchestrate a scheme with Batman's Brother Eye, and stirred the pot with the already dysfunctional superhero community, and I got to work reclaiming my rightful place as Superboy and beat Connor's sorry ass to prove it, and get him out of the picture! Then the loser Teen Titans came along picking a fight. And I lost my damn patience! I'd had to watch the heroes I sacrificed my entire home for keep messing up, and now they were attacking me! What was I doing wrong!? Well, in hindsight, I did lose my cool, did get carried away, and kinda I ended up killing at least a quarter of the team by accident, but as far as I'm concerned, they asked for it! As if things couldn't get bad enough, The Speedsters, including Barry Allen (who I thought was dead), yanked me into and trapped me in the Speed Force and left me to rot! Natch, I busted my way outta there! The Speed Force may be damn powerful, but I'm Superboy, which means a teenage Superman! And we all know Superman can do anything. I spent a good 8 years in there (not that you could tell), but time works differently, so, Bart aged up into a 20 something and took up Barry's suit, where I forged this badass solar-absorbing armor that looked like the Anti-Monitor's, and joined Alex to watch him recreate the Multiverse, and finally get my home back. So, I set out to put the multiverse right, the way it was supposed to be. I was going to make everything perfect, and I didn't care how many of these fakers I had to kill to make it happen!

I could tell you more about my life and how these quote-unquote "superheroes" ruined it, but that's what Wikipedia

and the DC Database

are for. So, you better read up and stop bothering me! Finally some tropers made a proper page about me and not just a section in Superman's Rogues Gallery as before, but I'm still seeing as a villain! I'm not a villain, you self-righteous dickheads! I'm SUPERBOY!

Publications where I appeared:

List of the pretentious "examples" this amateur site slung me: