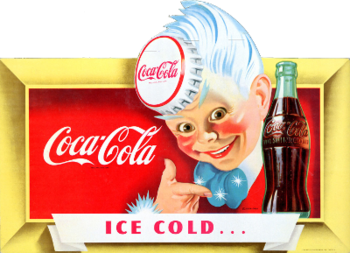 "P.S.: Everybody likes to shorten words. Abbreviation is a natural law of language. You hear 'Coke' — the friendly abbreviation for the trade-mark 'Coca-Cola' — on every hand. I tell the story in a picture you have so often heard in words."
— Me, in my first Coca-Cola ad ever
Advertisement:

(For the full self-demonstrating experience, read this in the voice of-) note  giggles "Silly you! I'm a character in a Coke ad, I don't have a voice actor!"

HELLO... note  Anything that's bolded would be represented by giant yellow text in one of my Coke ads.

I'm Coca-Coca, known, too, as- wait a second, this isn't an advertisement, is it? What is this... (gasps) My own TVTropes page?! YES! This is the greatest day of my life! I- oh, you're still here? Reading this? Well, then I suppose you want a proper introduction. giggles Alright, then. You want it, you got it!

Hello! I'm Sprite Boy, note  known, too, as "Kayoni" if you're one of those crazy PokéLatin speakers and I-

(screaming) note  "What? Am I really that creepy?"

(wide-eyed terror) note  "They've been doing this for years..."

...Yeah, as you can see, I haven't exactly been getting the best reputation nowadays... But still, I have a lot of things to tell you about my career. Especially since practically no one seems to remember me anymore...

So, where to start?

Well, I might as well go back to the 1940's at a little company you may have heard of called The Coca-Cola Company. You see, the brand's name was Coca-Cola, and all the executives thought people should call it that. But nope. Instead, people relied on something called "the natural law of language" note  see above and shortened the name to "Coke." And the company was not happy. They kept resisting the whole idea. note  Silly them! Who wouldn't want to abbreviate "Coca-Cola" to something shorter? But the consumers continued to use the name...

So they decided to come up with an advertising campaign that told people it was okay to use the term they'd already been using for years. January 1942 arrived, and yessiree, what a glorious day it was indeed! Okay, sure, we had a big war going on and Nazis terrorizing the planet, but that day was the first time Coca-Cola ever used the term "Coke." The best part?

THEY USED ME TO ADVERTISE IT!

You won't believe how happy I was that day! I had always said that abbreviation is a law of language, and look where it got me! note  Okay... I should probably calm down now. I wasn't nearly this exciteable in the ads- more on that later.

Life in the ads was pretty good. In my first ad (and in most ads to follow), I addressed the people directly. I was disembodied- only my head and hands were shown- and while that might sound creepy at first, believe me, it's not as bad as it seems. I was constantly smiling, and had a bunch of magic sparkles surrounding me. But the best part? I had fans. And a ton of them, in fact. Heck, I was used so often in advertising, I got two hats! note  I still had a Limited Wardrobe, though. As for my personality... basically, take that crazy guy over at that comic book company, put him in an elf's body, and make him a much friendlier guy. Yep, I was a friendly, mischevious, fourth-wall-breaking sprite boy with a penchant for Coke, ladies and gents! I was basically Deadpool before he was cool! Not to brag, of course.

And it lasted until about 1958, when I broke the fourth wall for the final time and was phased out of advertising. I was sad, of course, but like the happy-go-lucky sprite I am, I kept looking forward to the future.

And boy, was my future crazy!

I got my pictures and merchandise put up in museums and restaurants everywhere, and then in 1961, in comes a certain lemon-lime drink from the Coca-Cola Company. note  I'm not named after it. Nor is the drink named after me. I thought I was named after it at first, but it turns out I just gave them the rights to use the name and that the name itself was suggested by somebody else. So really, it was just a coincidence. After that, it seemed like I was completely destined to fade out of advertising...

...and then came a little thing called FANON, my friends!

A small community of fans who recognized my importance to the Coke community came together and created a full-fledged personality for me, fully establishing me as a friendly, mischevious, fourth-wall-breaking sprite boy with a penchant for Coke... and also a huge Stepford Smiler who desperately wants friends and wants to not be seen as just Accidental Nightmare Fuel. note  Which reminds me, do you know how many people have seen me as "creepy" or "insane" in the past few years? A lot. They also made me a lot more exciteable than I had been in the ads- and that's the personality you're reading about on your screen right now. Yeah, sorry, Sundblom, but you never truly gave me a full-fledged personality other than "Hi, readers! You can call Coke "Coke" now!" I mean, I know it was technically my job to be a fourth-wall breaker, but still... note  That's Haddon Sundblom, by the way. He's the guy who created me. Everyone says he created Santa Claus, too (who I actually appeared with

in a few ads- that's me, on the left!), but he'd been portrayed like this before.

By the way, let me check what's been going on at the Coke museum... WHAAAAAAAAT?! I'M GETTING MY OWN EXHIBIT?!

They really do care!

Trope time! note  By the way, could you please get me a Coke while you're at it?