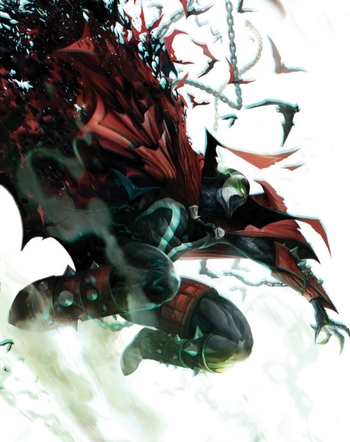 (If Spawn is channeling either Keith David, Kevin Michael Richardson or Michael Jai White, try not to piss him off. You'll live longer.)

It's said that an ending can sometimes be a beginning in disguise. In life, I was a hero. A Marine. A soldier serving God and country. Until I was betrayed and killed.

In death, I was reborn. The man once known as Albert Francis Simmons was no more. Now, I am Spawn.

I made my debut in my namesake comic in May of 1992, as an undead vigilante seeking only to reunite with my wife. But I became so much more.

I should start from the beginning, in a sense. My childhood was spent in Detroit, Michigan, me being the second-eldest of three children. Growing up, I joined the Marines and worked my way up to Lieutenant Colonel. Following a stint with the Secret Service, I was recruited into the C.I.A., where I joined a black-ops unit commanded by Jason Wynn.

He would be the one who orchestrated my death. I was betrayed by a person who I would take a bullet for, and was burned alive. But my death was just the beginning.

In Hell, the Devil himself, Malebolgia made me an offer I couldn't refuse: to join his army as a Hellspawn in exchange of me being able to see my wife again. I accepted the offer.

But Malebolgia tricked me.

Five years has passed since my death. Wanda had remarried my best friend, Terry Fitzgerald, and they both had a daughter together, Cyan. The life I knew was now gone, forever out of my reach.

So I made my home in the alleyways of Rat City. There, I found my calling, my purpose in my second life. I cleaned up the alleyways of the criminals who terrorized the homeless living there.

That was the beginning.

Oh, I've done many things as Spawn, troper. So many are my exploits, they are so long that I would take days to tell it all. But here are the key events. I took down Overt-Kill and fought off the likes of Angela and Jade, angelic beings who hunt Hellspawn like me. I almost caused the apocalypse by sleeping with Wanda and stopped it by sealing both God and the Devil away in order for them to has out their grievances. I've pissed off both Heaven and Hell with my actions and have not regretted it. I've made friends and stood my ground against new enemies.

I've also made my mark in entertainment, troper. The animated series is quite possibly my best work. I also have a live-action film under my belt. Aside from a couple of video games, two specific events come to mind, both of them fighting games. My fighting game debut consisted of me searching for Soul Edge on Malebogia's orders. My most recent outing involves dealing with Kronika and her scheme to reset time. And despite our differences, the Shirai Ryu grandmaster and his Lin Kuei counterpart are both kindred spirits. It turns out they and their thunder god have also met the billion dollar crusader as well. And that blasted clown is here as well. Not the one I'm used to, but nonetheless, I hate clowns, and the Dark Knight has warned me about him.

Everything comes at a price, troper. Remember that.