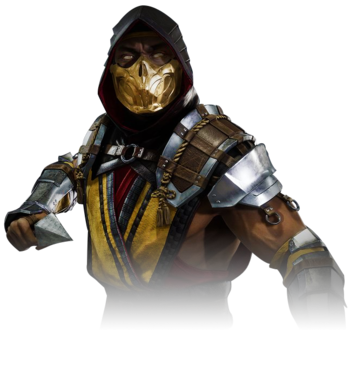 Scorpion is a character from Mortal Kombat, and is- *WHOOSH* *STAB* "GET OVER HERE!!" *POW* *THUD*

Do not call me by that name, troper. MY NAME IS HANZO HASASHI! You may address me as Grandmaster Hasashi, if you value your life.

As for my story, it is mine to tell and mine alone.

It is a story of family, of betrayal, and of vengeance. But most importantly, my story is also one of redemption...mostly.

And if you're reading this, Cage, I better not see any of this in any of your movies, or else there will be hell to pay.

Still here? Fine. I suppose I should start from the beginning.

I made my debut along with the other members of what Sonya Blade dubbed the Original Seven in 1992. Looking back on my debut, not even I would expect such a positive reaction from the public.

I had been many things. I was praised as a hero, as well as cursed as a villain. I had served Lord Raiden as a Warrior of Light, and served as an enforcer for Shinnok and Quan Chi.

But above all things, I am Shirai Ryu.

It was a life that my father did not want for me. He wanted me to be better, to have a life away from that of the Shirai Ryu. But I joined the clan against his wishes. I had a wife and son to support, and through the Shirai Ryu, was I able to do so. I was a devoted husband to my beloved Harumi, and a stern, yet loving father to Satoshi. It was here where I got my codename, due to my mastery of the kunai: Sasori. Translated, it means 'Scorpion.'

While it was a codename that I once wore with honor, it now fills me with shame. Shame regarding my time as a wraith in the Netherrealm.

Then...came the mission to steal the Map of the Elements. I faced my rival, Bi-Han of the Lin Kuei in kombat. I failed in that mission, and Bi-Han took my life.

In the Netherrealm, I was reborn. Hanzo Hasashi was gone. Even worse was that once I was dead, the Shirai Ryu was put to the sword.

I would get my revenge on my murderer two years later, on Shang Tsung's island tournament. Then during Shao Kahn's tournament in Outworld, I discovered that Bi-Han's younger brother had taken on his late brother's codename. I discovered that this was not the same man who had killed me, and thus, swore to act as his protector.

I may not have had a major role in Shao Kahn's failed invasion of Earthrealm, but it was after that did I discover the truth. When Shinnok made his attempt to conquer the realms, Quan Chi revealed himself to be the architect behind the slaughter of my family and clan. When he tried to banish me to the Netherrealm now that I had served my usefulness, I took the foul sorcerer with me.

I pursued and tortured Quan Chi for many years until he sent Moloch and Drahmin after me, then had them distract me, allowing him to escape. My fury was no match for Quan Chi's enforcers upon confronting them again, but I was thrown into the Soulnado inside Shang Tsung's place, having been rendered to pieces.

But as the old saying goes, I got better.

The Elder Gods saved me, and made me their champion against Onaga. Sadly, I was unable to follow through with my task. A man named Shujinko finished the job instead.

I was present at the Battle of Armageddon, but I was among the many kombatants slain.

My story should have ended there. But sometimes, an ending can merely be a new beginning in disguise.

Somehow, Raiden reset the timeline before Shao Kahn killed him in the last moments of Armageddon. Unfortunately, not much has changed. Bi-Han still died by my hand, despite me promising Raiden that I would spare his life in exchange for the restoration of my clan and family.

Two years after Shao Kahn's invasion ended with Johnny Cage and Sonya Blade as the remaining survivors of Raiden's forces, Shinnok launched another invasion of Earthrealm. I and the revenant form of Kuai Liang fought against Johnny Cage and lost. I would later find out that he was the one who defeated Shinnok.

Sometime later, Sonya and Johnny attempted to capture Quan Chi. Johnny was mortally wounded in the attempt and would have become the newest revenant had it not been for Sonya and Raiden's interference.

Long story short, Johnny was saved, and I was restored to life, along with Jackson Briggs and Kuai Liang.

I set about rebuilding the Shirai Ryu, taking in children whose parents were killed during the Netherrealm War. Among the children I trained was Kenshi's son, Takeda. Kenshi had left the boy in my care while he investigated a criminal organization called the Red Dragon.

Takeda was a prodigy in the Shirai Ryu arts. I began to see him as my own son.

But as I tried to rebuild the Shirai Ryu, there are those who would try and destroy it. This time, it was the mad Chaosrealm cleric, Havik. During what was to be known as the Blood Code Incident, Havik nearly succeeded in killing me, attempting to provoke me into bringing out Scorpion.

Be Careful What You Wish For, Havik.

I fought my inner demons and returned to the land of the living. Then, I tracked Havik down to Shang Tsung's Island Ruins, where a battle against Havik and his brainwashed kombatants (the Cage family, Jacqui Briggs, Mileena, Kotal Kahn and Raiden) and Queen Sheeva's Shokan forces was raging.

Havik didn't even see me coming.

I took his head to the Netherrealm, and left it with Moloch and Drahmin. Knowing Quan Chi, he would not let Havik live as a result of his failure.

Some years would pass after this. Takeda and Kenshi would reconnect. Cassandra and Jacqueline would join the military. Then, Johnny Cage approached me. No, he did not offer me a spot in his latest film, which I would refuse right off the bat, but rather he told me that he was forming a squad of four, the other three being his daughter and goddaughter, and the Shaolin archer, Kung Jin. Deciding for once that Johnny's plan was crazy enough to work, I allowed Takeda to join Team S-F.

Around the same time, I was invited to a parley at the Lin Kuei Temple. There, Kuai Liang showed me the truth.

Quan Chi, not Bi-Han was the murderer of my family and my clan.

Word reached me of Quan Chi's capture in the Netherrealm, being held in Special Forces custody. I...I screwed up. I was so obsessed with vengeance that I lashed out at General Blade, her former spouse and Kenshi. I took Quan Chi's head, but not before he was able to free Shinnok from his amulet and he and the revenants kidnapped Cassandra's father.

I would find out later that during the attack on the Sky Temple, while Takeda and Jacqui held off the revenants, Cassandra and Kung Jin confronted Shinnok and the Kytinn, D'Vorah.

And just as her father had did some two decades earlier, Cassandra Cage defeated Shinnok. Impressive, Cassandra. Most impressive indeed.

Two years would pass. We thought things would calm down. We were all wrong.

Following the death of General Blade, the mad Titan Kronika began to merge timelines of past and present, her goal being to unleash a temporal Armageddon.

Among those fighting for her cause was...well, me. She had recruited myself back when I was a revenant.

After working with Kuai Liang in destroying the Cyber Lin Kuei assembly plant, I granted Raiden and the others asylum at my temple following the destruction of Special Forces' Desert Command.

I would meet my own fate in the Netherrealm. They say that the greatest opponent is yourself. That adage rang true as I faced off against my dark half. After besting him in kombat, I convinced...myself that the new Shirai Ryu I trained were more than worthy.

Then, that damned Kytinn bitch killed me. But not before I made Scorpion promise that he would train and lead the new Shirai Ryu. Unfortunately Kronika's manipulation of time prevented Scorpion from joining Liu Kang in the final battle, but upon his ascension to Fire God, Kang made sure Kronika would pay for her transgressions.

My live-action exploits had left me with mixed opinions. I could have beaten that egomaniac Cage, but I resent being a slave to Shang Tsung. And surprisingly, I agree with Cage regarding the second film.

But I am impressed with the web show, as it is mostly faithful to what I once was.

On two seperate occasions, I encountered and tested my skills in kombat against the Justice League. Whether or not it were the same champions before Superman's fall is left open to question. It does present another opportunity to rid the multiverse of that homicidal jester, who I may be facing sooner than I think.

My path to redemption lies through these tropes.