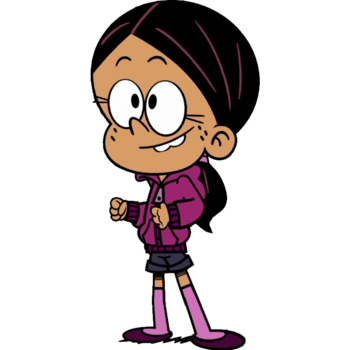 I'm a weirdo, and I clean up nice.
Advertisement:

(This page is best read in the voice of Breanna Yde or Izabella Alvarez. In other languages: Betzabe Jara in Spanish)

Hey, lame-os! The name's Ronalda Anne Santiago, but I prefer everyone call me Ronnie Anne. I used to live in Royal Woods, a small city-town somewhere in Michigan. I'm pretty much known for being the girlfriend-I mean good friend of Lincoln Loud, who still lives there in The Loud House with his ten sisters.

Back in Royal Woods, I was known and feared as the toughest girl in the elementary school I went to. I was a fearsome prankster, a powerful force in the school's social circle. I pretty much had the school under my fists, and it was my destiny to rule the world!! That sounded bad, didn't it? I mean, I was a bit of a troublemaker, especially in Lincoln's case. You see, I had a bit of a cr-cr-cr-cr....wish of friendship for Lincoln. What I saw in him was he was kind, caring, supportive, encouraging; and I decided I wanted to be a part of that. Unfortunately, I was a bit too shy and arrogant to know what counted as the proper way to do so, so I did the same old schtick with him. I humiliated him, pranked him, pulverized him and pretty made it unsafe for him to be there. I'm getting the idea that I probably shouldn't have done any of that. But don't tell anyone!

Anyway, Lincoln had enough of my routine and marched up to me, and he told me he wanted to meet up with me to finish the whole thing. I was brave on the outside, but it had me freaking out internally. Did my pranking work? Did he finally want to tie the kno-I mean, be a friend to a girl like me? Apparently so, because when he and I met precisely as planned, he kissed me. Right on the lips. I felt a full rush of emotion going on, and I freaked out so much, I punched him. Right in the eye. I still don't know what the heck I was thinking when I did that. After that, I decided to give Lincoln a steak for his eye, as well as a note with my phone number on it.

Since then, he and I have been talking. We're good friends for now, but he will be mine one day! I mean, never mind. Heh.

However, one day, the pack of wild pigs that made up most of the males in Lincoln's group learned about our secret dating thing, and predictably they started teasing him about it, to the point where he said I was rude and gross and totally annoying. Now, I know he didn't mean it, but I thought he did, and that hurt me so much, I cried. And yes, I can cry. The last time I remember crying before that was the first time I saw Titanic. Anyway, I told my brother Bobby about that (oh my god, I can't believe I forgot to mention Bobby was my brother.) And he broke up with Lincoln's sister Lori. Thankfully, they set up a double date at Jean Juan's French Mex Buffet in order to make things right. And everything was going fine until those same wild pigs showed and forced Lincoln to insult me again. However, just when it looked like the day was going to end badly, Lincoln made a pretty big speech about how actions speak louder than words, and kissed me again. That may have just been the best day of my life. But we decided to keep our dating private, so we won't get teased. And that's the gist of it, really.

However, I moved away to live with my bigger family, The Casagrandes, even though I didn't really want to, but you probably already know all about that. You could say I've been living a pretty crazy life there, almost as much as Lincoln. In fact, I'm loving it there: I've got a pretty caring family, a cool area to skateboard, a best friend in Sid Chang... Don't worry, I'm still in touch with Lincoln. We even do a few vlogs here and there. Pretty cool, right?

If you want, you can read about my personality traits, and what makes me...well, me. You know, Lincoln was right. It is a lot of fun talking to you guys. But once you're done here, RUN!! RUN FROM THIS WEBSITE AS FAST AS YOU CAN!!!

All the stuff I am:

Well, guys, it's been fun reading out my personality traits, but now I've gotta go. I promised I'd join Lincoln in a few "Band Battle" rounds (it's this new game Lincoln got) and I'm the singer. Gotta practice my singing on the way. Smell you later, Lame-os! Ahem... Rock and roll is running through my veins, hey, hey, electric soul like wires to my brain, hey, hey...