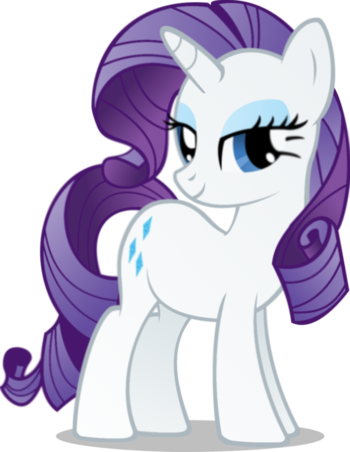 I must admit, I look particularly fabulous in this picture!
(For maximum effect, please read in the voice of Tabitha St. Germain.)
Advertisement:

HELLOOOOOOOOOO all you FABULOUS Tropers out there. So honoured you could take time out of your busy schedules to visit my page. Allow me to introduce myself, I am Rarity, Element of Generosity, teacher at Twilight Sparkle's School of Friendship, older sister to Sweetie Belle, heroine of Equestria several times over, and Fashionista Extraordinaire. I run the Carousel Boutique in Ponyville, where everything you wear is guaranteed to be unique, chic, and magnifique. I also have the Canterlot Carousel in Canterlot, and Rarity For You in Manehattan.

But enough about myself currently, let's talk about how I became the pony that I am today. Fashion has always been my passion, ever since I was a filly. When I was doing costumes for my school plays, I wanted to make sure they were absolutely fabulous. Alas, I did not seem to have the right techniques for it back then (nor did I have the materials I needed). Then, one day, my unicorn magic finally activated, and I began a journey (well, more like I was dragged across the land for a day and a night) that led me to... a rock.

Now, at first, I didn't get it. I thought "A ROCK!?" But then, there was an explosion of rainbow in the sky, and the next thing I knew, the rock had cracked open, revealing a mountain of gems within. In that moment, I knew what I needed, and had what I needed, to FINALLY get the look I wanted for the costumes. The play went off wonderfully, and I'd even earned my cutie mark for it.

Eventually I grew up, as all ponies do, and opened up the Carousel Boutique in Ponyville. Life continued on for a while until the day a unicorn by the name of Twilight Sparkle came to Ponyville. Upon befriending her, Nightmare Moon returned from her imprisonment and began her reign of eternal night. From there, we began our quest into the Everfree Forest to locate the Elements Of Harmony. During our quest, we happened upon a sea serpent with FABULOUS taste, who'd tragically had half of his moustache sliced off, leaving him inconsolable. I could not allow such a crime against fabulosity to go uncorrected, so, I sacrificed my tail to restore his moustache. When there, after Nightmare Moon seemingly destroyed the Elements Of Harmony, Twilight came to the discovery that I and our other compatriots were the Elements Of Harmony, with me bearing the Element of Generosity. With our combined powers, we defeated Nightmare Moon, restoring her to Princess Luna, freeing Princess Celestia, and bringing back the sun.

Now, as said earlier, I am the bearer of The Element Of Generosity. And I most certainly live up to that monikernote  although I admit that I do falter from time to time. I believe that a new look can do wonders to bring a smile to a pony's face, and will graciously sacrifice my time to help anypony in need.

And, as I also said, I am an older sister to young Sweetie Belle of the Cutie Mark Crusaders. We have your usual sisterly relationship, which is to say, we're prone to bicker and disagree on many a topic, but in the end, we'll be there for each other through thick and thin.

My goodness! We're being invaded by giant machines that turn into vehicles.

I must say that some of them need help in getting proper paint jobs. Slime Green and Dark Purple are not suitable colors. Spikey-Wikey is an exception as he was born with them. I ran afoul of one named Starscream, an arrogant blowhard who sought to reach higher than his station. Thankfully an Autobot named Arcee put a damper to his plans.note  Starscream: That debacle never happened! Even if it did, I would have easily dispatched that meddlesome Arcee and swiftly conquer that pitiful little world of yours without any resistance!

Look here for my main page.

These are the tropes that best describe me: