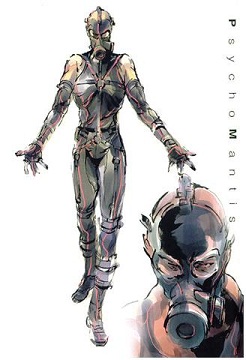 (You may listen to this

Yes, troper, this is one of yours. It is me as well: Psycho Mantis. That's right. This is no trick: It is true power. From the moment you saw my name on that self-demonstrating list, my work was being done. One young mind of such a website will now tell you my story.

I am the most powerful practitioner of psychokinesis and telepathy in the world. Having always known myself as a member of FOXHOUND, I aided Liquid Snake in his schemes in the year of 2005. His designs of war and world change didn't interest me. I only wanted an excuse to kill as many people as I could. One day I had a vision that changed me forever. In my mind, words and numbers appeared as random, and much later I could make sense of it. I remember them all: "Konami"; "Kojima"; "1998"; "Solid".

It seems my exploits were documented in fiction. In 1998, a man named Hideo Kojima working for a company called Konami brought me into existence in a game called Metal Gear Solid. Released for the Sony PlayStation, that was a stealth game in which I served as a boss to be defeated by that man called Solid Snake. Upon delving further into it, I became aware of many other things: My battle was massively acclaimed as a shocking mix of reality and fiction, with the screen going black with the word "HIDEO" and players having to change the controller ports to defeat me. Not only that, I could read the console's memory card and know what the player played. Some of them liked Suikoden and some liked Castlevania. Those games are somehow known to me.

Such research made me unable to ever see the world in the same way again. All the pain of my life has been a stage! In which I was but a puppet! My father's hatred of me; my village that I burned; my reading of a killer's mind... all but a play, in which I was fated to be a part of. There was nothing else to calm my raging mind, until I made the decision to embrace this once unknown power of mine. By using my powers to bend reality and fiction to my will and in a distant, I was able to live long enough until the fateful battle with Snake.

Since then, I have found myself stuck in a cycle of death at Snake's hands and rebirth into the game when someone played it again. I have known more and more about this situation and now I now what happens around me. I have been keeping track of Kojima's work and I am pleased to know that the lasting impression of my powers were not confined to that game. Metal Gear Solid 4 had the woman called Screaming Mantis fighting Snake in way that remembers our old duel using my powers with the help of nanomachines. I lived inside her as leader of the Beauty and the Beast Corps. That new stage of my existence has been cut short however by The Sorrow's interference. But I would always come back.

Kojima has not forgotten me, as he uses my past in Metal Gear Solid V, where that young child terrorizes Big Boss with hallucinations. I cannot read the future, but I sense I will be part of it. Kojima's mind is one of the few I'm unable to read.

You might not know, but more than using your fellow troper's mind to write these words, I can make him speak in my voices. The ones I thought were mine: the Japanese Kazuyuki Sogabe and the American Doug Stone. You may read these words in one of these voices, or I can make you speak them as well.

My endeavors are favored in this site, as I am known here as the God of Illusive Failure. That is mostly expected. Such abilities of mine are no tricks, but true power, not ever seen by any man before. You will now know the tropes associated with me.

Oh God. I can't believe someone controlled my mind to write this. I can't actually believe it was him! He's a fictional character! He couldn't have done that to a real person like me!

What?! I can't read you!! How?!!! There aren't supposed to be any controller ports!!!! Where are all these further edits coming from?!!!!!