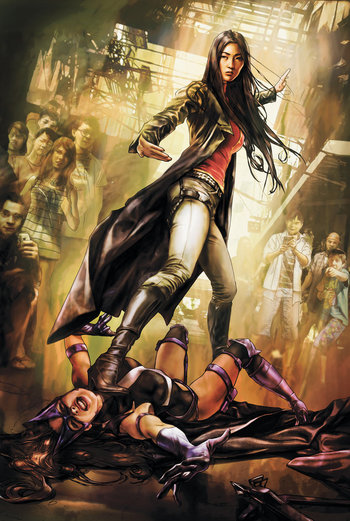 (Best read in the voice of Kelly Hu or Gwendoline Yeo).

I assume that Dinah warned you about me?

My reputation speaks for itself, troper. Simply put, when my comes to pure, raw skill, I'm the best martial artist in the DC Universe. That's no hyperbole, either. It's a fact.

Not even Batman himself can best me, and even now, he dreads facing me in combat. The only one aside from my daughter who could truly surpass me would only be born a millennium from now.

I've been not only a killer, but also a vigilante. So I have intimate knowledge on what it's like being on both sides of the fence.

I believe Barbara Gordon describes me best. Simply put, I hunt down the strongest warriors on the planet and fight them to the death bare-handed.

I should start from the beginning. I won't be long. I made my debut in 1976 in Richard Dragon, Kung Fu Master as a rival to the aforementioned martial artist. We teamed up from time to time, but given the fact that I'm an assassin-for-hire, the partnerships don't exactly last.

I was once known as Sandra Wu-San. Along with my twin sister, Carolyn, we grew up in Detroit, perfecting our martial arts. But out of the love I had for my sister, I always held back.

David Cain saw Carolyn as a crutch, a hindrance. So he removed it by killing Carolyn.

When I fought David, I realized that he was right. Carolyn was holding me back. I had so much untapped potential. David spared my life, with the caveat that I gave him a child.

When Cassandra Cain was born, Sandra Wu-San died. Like a Phoenix rising from the ashes, I was reborn. Reborn as Lady Shiva.

I have met many kindred spirits who shared my love for combat. Aside from Richard Dragon, there was also The Question. I was originally paid to kill him, but I took him to Richard to unlock his full potential as a fighter.

My occupation has led to many encounters, hero and villain alike. Black Canary and I trained under the same master, albeit on seperate occasions. Through The Question, I met Batman for the first time. When Bane broke his back, I aided the man in his recovery. I've also given his third Robin some training, although his principles against using deadly force are irritatingly naive.

I even have an on-and-off relationship with the League of Assassins. Sometimes, I work with them. Other times, their interests go against my own.

I would even work with Canary and the Birds of Prey for a time, Canary trying her hardest to make me change my ways. But I can't. I do what I do because I enjoy it.

Comic Books aren't the only place where you can find me. I was one of several assassins hired to kill Batman on Christmas Eve. The money was just a bonus should he failed my tests.

I'm actually upset that I did not fight alongside Canary when she made her own fighting game debut. It also opened me up to new opportunities when she told me about Kuai Liang and the thunder god. Batman suspects that the two men in question along with Hanzo Hasashi are the same men that came from an alternative Earth in the past.

Raiden's chosen fighters have definitely sparked my interest. While Cassandra's victory over Shinnok is indeed impressive, her parents may be holding her back, I fear. Or maybe it's because of them, can she reach her true potential. But it's the Shaolin warrior Liu Kang that has caught my eye. Kitana may prove to be a challenge, but it's the Shaolin that I'm after. Perhaps he will give me the fight of my life. We do have something in common: seeing that cackling jackass put down like the rabid animal that he is. Batman refuses to do so because of his self-imposed restraint. Too bad that has ruined lives than helped them.

Akuma, from what I can tell, is a kindred spirit. Perhaps one day we should trade notes... before our fateful duel.

Think you are worthy, troper? We'll see if you can pass my test.