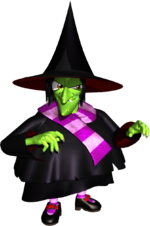 Huh!? An intruder?! In my lair? Is it that accursed bird and bear? You're not the one known as Banjo and Kazooie? You should've said so! Ah phooey! You wanted to know about little ol' me? Then I shall enlighten you, how generous I can be!

I am Gruntilda, Gruntilda the witch! Such a good and evil name that will cause you to twitch! I am the Big Bad of the bear and bird's stupid game. "Banjo-Kazooie".... ugh how lame! My evil plan came me to day. It was about my good looks, what can I say? However, I was told I wasn't the best looking. Banjo's stupid sister was, so a plan I had cooking! I wanted to steal her looks for myself, and it was a plan that didn't require stealth! I swiped up that little bear with much ease, I can then steal her beauty and do with it whatever I please! My faithful assistant Klungo was by my side, and all he needed was to pull the lever to begin the ride! My plan was nearly successful it was, but here comes the bear and bird just because! They managed to clear my Furnace Fun, I had no choice but to run, run, run! At the top of my tower our battle we had, I ended up losing! How very sad! Down from my tower I graciously fell, into the ground with a rock blocking me, oh well. I stay there for years, what a hooey. Until I made my comeback in Banjo-Tooie!

Bah... for the sake of the second game, I won't be speaking in my rhymes. My sister Mingella was annoyed by how much I spoke by rhymes in the game and, frankly, I could see why. Anywho, after being trapped under that rock for a long time, said sisters Mingella and Blobbelda finally came to my rescue in what would be known as the Hag 1. I was finally free! At the cost of my body! Nothing but bones is what I was devolved into... I was so upset especially after seeing that stupid shaman Mumbo Jumbo spying on us and I decided to take matters into my own hands! I chased that skeletal freak to Banjo's house where I was prepared to kill 4 birds (one of them was an actual bird) with one stone with my most powerful blase! Unfortunately, I missed Banjo, Kazooie, and the shaman but I got that stupid mole Bottles instead! A good way to show I mean business this time! After that, I went back with my sisters on the Hag 1 (leaving Klungo behind so he can take care of the stupid bear and bird) so I came up with a much more devious plan to get back my youth! Well, I guess my sisters should be taking the credit but whatever! This device was known as the Big-O-Blaster (or B.O.B. for short) that had the power to drain the lifeforce from others and store it! I was so enthralled by the device that I decided to test it out on the person that gave that stupid bear his first Jiggly: King Jingling. His life was drained and it turn him into a zombie! Serves him right! B.O.B. was successful and I wanted to blast the entire island by my sis said it would've took a long time but I have patience so I could wait!

Like with my first appearance, my role once those "story-scripted events" ends is shortened as I'm on the sidelines until Banjo gets enough Jiggies to access my lair. Sadly, my random rhymes are taken away but I am still the focus of the game I assure you. After Banjo and Kazooie finally make it to my lair, they must pass by my glorious Tower of Tragedy quiz! They had to play alongside my two sisters with 100 ton weights over top of them! If you have less points, you'll get crushed! Of course my intention was to get the bear and bird thinking they're too stupid to pass my quiz, but, alas, I lost my two sisters instead. Oh well. Sacrifices must be made in order to further my own goals! *laughs evilly* Anywho, like with the first game, I escaped to the top of my lair where I eventually fought the duo in my tank, the Hag 1! And I certainly gave them a run for their money this time! Unfortunately, I was defeated yet again and I reduced to a head being kicked around... I mentioned that I'll get them back in Banjo-Thereeie but that never came to be...

Ahem! Enough of all of the Banjo-Tooie times! Time for me to get by to my rhymes! My series found a new home, I supposed that rocks. On a system known as "X-box". Banjo-Kazooie Nuts and Bolts is the name. It's certainly different from any other game. A game about racing, no platfroming at all. Our series took a hit, harder than my fall. A new character named L.O.G., such a dumb name. He purposely changed our series because he felt it was the same. He gave me robotic body instead of a new one. But promised me greatness if I won! I had a new assistant, a cat named Piddles. She's so tricky, even more than my riddles! Alas, despite my fight, I lost at the end. Forced to work in L.O.G.'s factory, I hate this trend!

Read my tropes, if you dare! I promise that you'll be in for a scare!