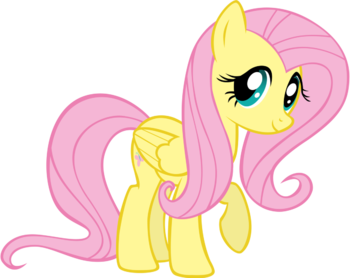 Do you like how I look in this picture? It makes me feel overjoyed.
"Sometimes we all just need to be shown a little kindness."
—Me, I guess.

EEEEEEEEEK! Wh-wh-who's there? What do you wa- ...oh. Visitors? Knocking in my cottage's door?? ...um, sorry if I startled you for a moment, I get scared quite easily. I don't interact much with people. Please, come on in, if you want to... and make yourselves comfortable.

Alright, so here's a bit of tea for you to drink up, and... oh, sorry! Did you have anything to say? Talk about... me...? ...o-o-okay, Tropers, but only because you politely asked. My name is... Fluttershy... and I'm the Element of Kindness. I'm a pretty shy pony that loves to take care of animals that come to my cottage. I've also helped my big friend, the Princess Twilight Sparkle, save Equestria many times. I even reformed a big threat to Equestria in Discord, and now he's on our side.

...what? How did I come to this? Um, let me remember... so I was a filly back then and lived on Cloudsdale. Honestly, I was a weak flier, plus I was afraid of heights and couldn't lift my body off the ground. This led to... bullies... mocking me off for that... when I was at a summer flight camp... *(sniff)* ...but, you know what? My friend Rainbow Dash stood up for me, and once even challenged the bullies to a race. But they accidentally pushed me away when the race started, and I fell to the world below...

I couldn't lift my body off with my wings due to the fear, but fortunately, a group of passing butterflies saved me, and I discovered nature and animals for the first time in my life, and was finally able to fly! I even sang a song about it! Then a rainbow-colored explosion happened and the animals outside hid in fear. But I comforted them and convinced them to come out again. Discovering my ability to talk to animals on a different level is what earned my cutie mark!

I eventually grew up, but still remained very shy, only going out for groceries when I needed to, and caring for the animals in my cottage. I even adopted my own personal pet, a white bunny who I called Angel. Then one day... I met Twilight Sparkle, who just came to Ponyville. My shyness kicked in, again... but then this little baby dragon, Spike, appeared and I was enthusled! I befriended both in a moment, but then an evil alicorn by the name of Nightmare Moon appeared, having returned from imprisonment, and caused night to never go away...

I followed her and her new friends to find the Elements of Harmony to... this very scary place... the... *(gulp)* ...Everfree Forest. A manticore appeared, and the others caused such a hubbub trying to subdue it. But I silently approached it, and saw the cause of its aggressiveness: a thorn on its paw. I removed it and won its trust, and it left us alone. We eventually confronted Nightmare Moon, and she destroyed the Elements of Harmony. But Twilight discovered from our actions that we encompassed such elements, with me bearing the Element of Kindness. With our combined powers, we put Nightmare Moon down and restored her to Princess Luna, freed Princess Celestia, and brought back the sun.

...I haven't bored you all yet, right? ...oh, okay, good to know. I was just asking. Anyways, I bear the Element of Kindness, so it's on me to be a good person to mostly everyone I meet. I used to be a doormat, even... but hey! I do have my moments where I can stand up by myself, so don't think you can hurt my friends or nature just because you think you can. I will stare you down until you show repentance.

If you don't mind... and, for better results, you could read my page in the voice of Andrea Libman. After all, she gave my voice life.

Read the Tropes that apply to me... if that's alright with you...

Aww, leaving so soon? Well, okay. I guess everyone has to leave at one point. But please come back! ...that is, if you don't mind. We can talk about animals the next time we meet!*(squee)*