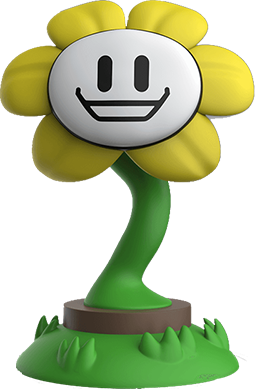 For best effect, read this in a voice similar to Alex Rybetski.

Howdy! My name is Flowey! Flowey the Flower! Nice to meet'cha! It's not every day we get visitors from the surface around here! And it's about time I finally got a page all for myself! If you're going to stick around, I'd be happy to be a new friend to you! Because you won't be leaving this page without reading it, right?

Hmmm? What do you mean my face got all freaky for a second? Oh, you must mean my funny faces! Anyway, I'm here to guide you through my little tale of what I've been through and outline just who I am! But first, how about you and I have a little bit of fun first? If you want to know more about me, go ahead and click on this link! I promise that it'll be a lot of fun!

...No? You avoided that link? ...Well then, how about taking a peek at this one? It's sure to give you plenty of sweet dreams!

...You're not falling for any of that, are you? You know exactly who I am and what I entail, don't you? You're doing this just to toy with me and make me suffer, is that it? In that case... DIE.

And there's no Toriel to save you this time, kiddo! Toodle-loo!

...Although, that would be a little bit too easy. You know how I operate, and even if I were to kill you here, you'd just come back as always to read the article. The power of DETERMINATION isn't an exclusive concept to the world I come from, after all.

Anyway, since I assume you're familiar with who I am — that is the reason you're reading this, right? — let me start at the beginning. I am but a simple flower who greets any humans who enter the underground, where the monsters all live! They've been trapped down here for years, and they're hoping to get out from underneath the mountain one of these days! ...At least, that's only what's on the surface level of this little tale of woe. The truth is, quite naturally, much, much more complicated than you can ever imagine. So, let me start at the true beginning of where I come from and what lead me to this state you're seeing me in. This is also a massive spoiler warning if you have yet to play my home game, so if you're still willing to read beyond this point, then it's your loss, bucko!

Anyway, who am I, really? Well, it was a little fuzzy at first, but thanks to that nerdy scientist's old VCR tapes, I've caught myself back up to speed. I am the crown prince of the royal Dreemur family, Asriel, born to Toriel, formerly the queen, and Asgore, the still reigning king. When I said I was "the prince of this world's future," that wasn't just me being boastful; I literally am a prince by blood. I lived a pretty happy childhood and was loved by many for my kind and helpful personality. Good luck finding either of those qualities in me now, though; they ain't there.

Things took a turn for the interesting when a human fell down from the surface. Ha ha, no, not that one. No, I mean the very first human who fell down. The one you all have taken to calling "Chara"...even though I don't think they ever really told me their name. In any case, despite being wildly different species, my mom and pop took them in and treated them like they were a part of the family. We gave them everything, love, care, attention, food, a roof over their head, a family...it became a home away from home for them. And what fun we had! Drawing pictures, eating Mom's pies, pranking Dad with the buttercups...it was a lot of fun. Then they ate some buttercups themselves and it stopped being fun.

From there, I ended up absorbing my friend's soul after they passed on and became a being far more powerful than anyone could've ever imagined. I crossed the barrier and walked toward the village where my friend had lived, carrying their body the whole way there. When I arrived, I was met with a higher level of LOVE than I expected and found myself getting attacked from all sides. And you know what I did? I allowed them to attack me and retreated with a smile on my face and too many wounds to count.

...What? Did you really expect me to go whole hog on everyone out of vengeance? That was before I died and became this. Yeah, yeah, hold your Gyftrots! I'm getting to that part! To make a long story short, I died that night and was little more than the soul of a boss monster. The entire kingdom went into a bit of an uproar and Dad was mighty angry, enacting the policy that any and all humans who fell down were to be killed, and their souls brought before him; the key to breaking that barrier was to collect seven of them.

At some point during this mess, my soul got caught up in Dr. Alphys' experiements; more specifically, an experiment meant to discover what would happen if an everyday object were given a soul. Heh, the look on her face when she realized I had escaped that junk heap of a laboratory... But, am I here to gloat about ducking out of sight of a nerd or recounting my tale?

Anyway, the years passed. More humans fell down underneath Mt. Ebott, each one more determined and capable than the last. More souls were gathered. Tensions flared up. The monsters got restless. And here I was, trying to feel something - anything - for my parents, for the population of monsters, for anyone. But I couldn't feel anything. Even after I discovered how to SAVE and LOAD from a previous point in time, any effort to give myself emotions ended in failure. Even trying to save all the monsters did absolutely nothing for me. And at some point, I gave up trying to be nice. The isolation I felt... It was maddening.

Soon, Asgore had six of the seven souls he needed. All he needed was one more. And as fate would have it, that one kid came along... Frisk, I think their name was. From the moment they fell down, I knew they were the one. The one to break the barrier, the one to save all of monsterkind...or destroy it. The one who would be my pawn in this grand game of mine. What happened next...was up to you. You had full reign of their actions and how they handled battles. Sometimes they'd save everyone like your garden variety hero. Sometimes they'd kill everybody and destroy the world. Sometimes they’d straddle the line between the two. Regardless of how things played out, you'd be hard-pressed to find a scenario where I'm not involved in some way. Because I'll be here forever. And don't even think of editing this page to get rid of me, because I will always come back!

Now that that's all out of the way, feel free to traipse around this little cavern here. ...Seriously, that's all I have to say. There's no Easter Egg or any little touches to make me react to your lingering presence. This page isn't complex enough for that.

Some of the tropes that little ol' me embodies:

This is what happens if you spare Flowey, as he will not understand why are you sparing him despite everything he have done to you

This is what happens if you spare Flowey, as he will not understand why are you sparing him despite everything he have done to you