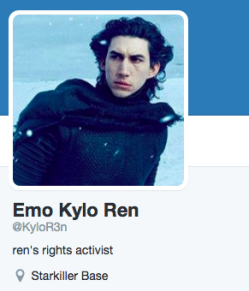 Currently located in a sarlacc pit...emotionally.
"I wish mom would stop pretending she understands what I'm going through! we are all out of conditioner..."
~ One of my very first tweets
Advertisement:

(Best read in the voice of Adam Driver. Hearing it muffled and electronically distorted is optional.)

I am Emo Kylo Ren and I am a tortured soul. Not because I was a slave or anything like that. My parents and uncle Luke just don't get me. My grandfather didn't have these problems because he never met his father, which meant he got to do awesome stuff like build droids and compete in podracing when he was only 9 years old.

Only two people in the whole galaxy get me: Supreme Leader Snoke and this chick from Jakku. Her name is Rey. She hides it really well, but deep down I know she sees something in me. Sure, Snoke lets me fly ships without a license and I get a cool red lightsaber that looks like an inverted symbol popular in your galaxy, but...well...Snoke

Since 2015, Disney Studios has been documenting my journey of self-discovery as well as my blossoming romance with Rey. She's into me. I know it. Even if the Force tells me she isn't.

Tropes That Illustrate My Complexity

A buddy of mine saw Kylo Ren take his shirt off in the shower. He said that Kylo Ren had an eight pack. That Kylo Ren was shredded!