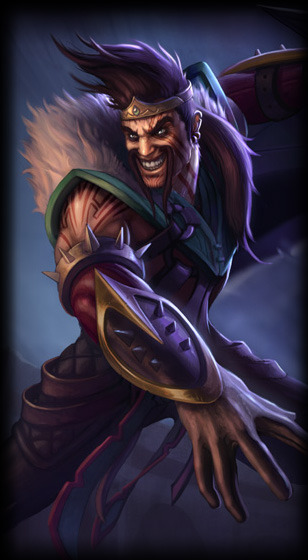 This page is best read with the voice of Erik Braa. Accept no substitutes (except the Japanese voice

, which while the voice actor remains unknown, I still sound uber sexy in Japanese)!

Welcome to the Draven

Well, forget about all those world, and let's admire this guy for a bit...

Yeep, me! Draven! Best champion from Runeterra there is. I got the looks, I got the style, I got the moves, I got the perfection, I got the mean axes for spectacular pain to serve, and I don't do subtle. Y'know, I'm starting to wonder why that game isn't called 'League of Draven' because obviously Draven makes all the awesome show there.

So yeah, Draven used to be a poor kid, yes, there were such times for Draven, someone gotta start small before they go big after all. Anyway, poor kid with an equally poor big bro Darius, we kinda fought our ways in the hard streets of Noxus, until this Grand Birdie General, Jericho Swain, took notice of our fighting styles and drafted us to the Noxus army. And yeah, we were awesome back then!

But Darius, being such a boring big bro, thinks that being all stiff and following orders are enough. No, Draven wants more, man, Draven wants the cheer, the awesome chants of his name, now that's glorious! Army obviously ain't for Draven, so Draven started scouting some other job that lets his talent of killing shine on while getting treated like a celebrity, cheered by everyone. Hard to find a job like that, but what's this? A dull job like an executioner? Making something dull into something awesome... well, that looked like a job for Draven!

So on the first day job of Draven, it was boring like usual, the crowd was gettin' sleepy, thinkin' that it's just gonna be some plain ol' boring behead the prisoner, done. So I decided to give'em some Draven. I told the prisoner like this, "Hey you, run off to that exit door. Do it, then you're a free man!" So the prisoner did run, and the crowd started to put their attention there. Maybe they think they'll just accuse me as the traitor, but I changed their mind that just when they're near the exit, one perfect axe throw and then SMACK! Dead prisoner.

It was such an awesome show that the crowd went from being bored to death to cheering of such an awesome display. So contractors started going like "Hey, Draven, help me pull the execution of this guy. It'll be great!" And the more executions I did, the more elaborate gauntlet I made for the prisoners, and I always get my mark, and thus Draven has successfully turned a boring execution event to a grand circus, Draven is now the Glorious Executioner!

But maybe executing weak prisoners won't be much of a challenge these days. So when there's this 'Field of Justice' and 'League of Legends' thingy, I think it's about time I expand this show of mine, I'm gonna show my boring militaristic bro that this is what being awesome means!

So for you players out there, don't worry. Draven has always been a top tier, fun ADC, dedicated to kill and kill more enemy champions and get more powerful and adored because of that. As a bonus, Draven's got some fun mini game for you, if Draven attacks while his axe is spinning, the axe bounces, and if you make me catch it, the axe spins again. Fun mini game, beneficial for good attack steroid, kinda hard but worth mastering for, well what more can ya ask? Pick Draven as your main ADC, now!

(Cue a 'Yaay!' sound because Draven just finished his article and consumed his adoration points!)
Draven's making an exit!