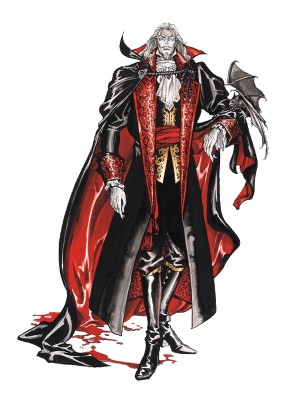 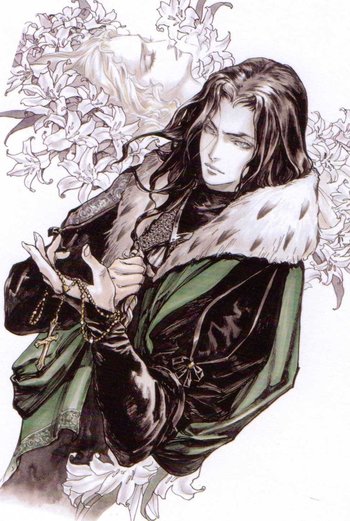 (The Lord of Vampires is beloved by the night. Especially when channeling Norio Wakamoto, Nobuhiko Kazama, Joji Nakata, and Naoya Uchida if speaking Japanese. For English, then it's Michael Guinn, Crispin Freeman, Patrick Seitz, and Graham McTavish. For Spanish, its Carlos Segundo)

Mankind. A cesspit of hatred and lies. I know of this first-hand. Is that why you're here, troper? You have come to me because you shun the light in favor of the darkness?

If so, then permit me to introduce myself. (bows) I am Dracula Vlad Ţepeş. And I do not get many visitors nowadays. I am the genuine article, not the Belmont who fancies himself as me.

It seems that I am the first vampire to be given his own page. I do set the standard, after all.

I was not always the Lord of Vampires. My origins were a bit more...humbler.

My birth name was Mathias Cronqvist. A name I haven't used in a long time. That was who I was before I shed it in favor for my current one. I was born in the year 1060, raised in an era in which for a knight, knowledge was just as valuable as gold. That was instrumental in my joining an order of knights alongside Leon Belmont, fighting for God and country.

Surprised? Long before his descendants became the bane of my existence, I considered Leon as a friend. I also married my sweetheart, Elizabetha. She was a frail woman, but I was devoted to her all the same.

Until God took her from me.

I was away with Leon on a military expedition when it happened. Elizabetha was alive when I left. When I returned, she was a corpse. I fought wars in God's name and this was my reward?! He took away which I loved the most!

No more. No more will I serve Him.

I came to the conclusion that if being mortal is God's decree, then I will defy it.

And let God and all His works tremble.

With that, I began to plan, all the while pretending to be bedridden from grief. To gain eternal life, I recreated the Crimson Stone. All I needed to complete it was the soul of a powerful vampire.

A shame that I had to use Leon and his betrothed in my scheme, but the end justified the means. I was the puppet master and I made everyone dance to my tune; Leon, Sara, Walter, even Gandolfi.

It was my master stroke, if I can be so modest. I knew Leon would triumph, weakening Walter enough to allow Death to steal his soul and absorb it into the Crimson Stone.

Despite everything, Leon was still my friend. I'd rather not have Sara killed before she turned, but it served my purpose. I offered Leon the chance to become a vampire, but he refused my offer.

Eternity without her would be nothing but emptiness.

Looking back on it now...I understand what you meant by that, Leon.

Not even Death could stop Leon. When I met up with the Reaper of Souls, he had a message for me, from Leon:

You have become a cursed being and I will never forgive you. This whip and my kinsmen will destroy you someday. From this day on... the Belmont Clan will hunt the night!

So began the Belmont Clan's vendetta against me, one that would end with my death a little over 900 years from now.

I fled Transylvania and changed my name. Mathias Cronqvist was dead. Now, and forever, I was Count Dracula Vlad Ţepeş. Over the centuries, I built my power and influence, with Castlevania as my crowning achievement and symbol of my power.

Over four centuries would pass. Then, I met Lisa.

I was smitten. Lisa was a healer, creating medicines to care for the sick. She had that fire, that gentle strength that Elizabetha once had. Well, that and she could pass as my first wife, reincarnated.

We fell in love, and she warmed my black heart. We married and she bore me a son, Adrian Ţepeş. You know him as Alucard. (smiles fondly as he looks at a family portrait of himself, Lisa and a young Adrian

(mood darkens) But once again, my love was taken from me.

The Church accused my wife of witchcraft when all she did was tend to their ills. My beloved was no witch. But they burned her at the stake.

When Lisa died, all that remained good within me also died. That was when my war against mankind began.

But mankind had its protectors, primarily those from Leon's bloodline. I still remember their names, their faces, even now. Trevor Belmont. Christopher and his son. Simon Belmont.

But what hurt the most was when my own son not only disowned me, but rebelled against me and sided with the humans! The same mindless fools that killed his mother! He would later tell me why after we had fought, that he was following Lisa's final wishes.

Do not hate humans. If you cannot live with them, then at least do them no harm, for theirs is already a hard lot.

Adrian also relayed a personal message from Lisa to me, that she would love me for eternity.

Adrian's revelations were not enough to stop my plans. If it wasn't a Belmont that challenged me, it was a distant relative, or an order of monster hunters. As long as man has hatred in their hearts and offer me tribute, I shall return.

Adrian finally figured that out. In 1999, in what would be known as the Demon Castle War, I died my final death. By severing my link with Chaos and by extension, Castlevania, I died not as Dracula, but as Mathias Cronqvist.

I would later be reincarnated as Soma Cruz, but that is another story. Along with the one where I seemed to have started out as a Belmont myself.

Aside from the standard fare of action games, I also have a fighting game under my belt. It also has made the fighters here wary of my intentions. The only one I actually like is the Queen of the Makai. Yet, I do share that soul-stealing sorcerer's sentiment regarding Sonya Blade. Her fearlessness reminds me of Lisa. However, the son of Sparda could be considered a threat should he comes after me. Better keep an eye on him for the time being. I was also invited by the entity known as Dharkon to wage war against his antithesis, Galeem. In addition to being the end boss to both Belmonts in their Classic routes, I was the final boss to some strange yellow spherical creature that eats "ghosts" and a human plumber that hunts them. I am also the midboss to the so-called "One-Winged Angel" in his path to being "The Undisputed". I admit he was a formidable opponent and I had to yield.

But it is the animated adaptation that impresses me the most. It makes me into a more sympathetic villain, and brief as it may been, showed my relationship with Lisa. To the creators of the show, I raise my glass to you. A far better depiction of me than that asinine mediocrity that dares passes as myself! Or that ridiculous parody Alucard from Hellsing note  Fuck-Mothering-Vampire: I killed a lot of people to earn my title!

What is a trope? A miserable little pile of secrets! But enough talk. Have at them!