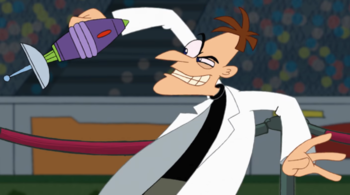 This page is best read in the voice of Dan Povenmire or German Fabregat.

And by the way, you are now trapped... by this article! You see, I have been studying this website TV Tropes, and what I have learned is that pages like these will distract you forever! They make you obsess over the various tropes and intricacies of fiction, open twenty different tabs at once, get stuck editing pages all night, and overall be unable to direct your attention away, and thus your life will be ruined!! Or at least, that's what happened to me.

So yeah, you're now trapped. Go on, keep reading and wasting your life. Here, I'll even activate the "Read-This-Page-In-My-Voice-Inator" to make it easier.

Let me tell you more about myself. I am one of the main characters of Phineas and Ferb. My name is Dr. Heinz Doofenshmirtz, but my friends call me... uh... anyhoo, that's not important. Contrary to what people say, I am not a pharmacist! I am an evil scientist, and mark my words: I shall soon take over... the entire!! TRI-STATE AREA!!! HAHAhahahahaha...note Oh, and slight disclosure, I am not in any way, shape, or form related to that Re Destro guy, nor is he actually me transformed by a Handsome-Inator into a muscular hunk. I know a lot of people think he's me, and trust me, I get it. Heck, if he makes one of these articles, he'll tell you himself!

You might be wondering, "Why would he do this? Why would he trap an innocent little troper like me? What could he possibly hope to gain? What emotionally scarring backstory could possibly have made him so terrifically evil?" Well, to help you understand, I think I should tell you a little about my childhood.

It all began back in Gimmelshtump on the day of my actual birth. Neither of my parents bothered to show up. And my family was so poor that our beloved lawn gnome was repossessed. So day and night, I had to work as a lawn gnome. One day, I learned my parents were expecting a brand new baby girl. My mother spent months knitting pretty dresses. Unfortunately, the baby turned out to be a boy. Because we were out of material, I was forced to wear those same dresses for an entire year, drawing mockery and scorn from all of my manly classmates. And oooh, my brother Roger. He was always my mother's favorite. You see, her love was inexplicably linked to kickball, and Roger was an expert at it.

My social life was, to say the least, a soul-shattering void. On my fifth birthday, I had to throw my own surprise party. A bully named Boris was always kicking sand in my face, and a girl named Grulinda would always pour water on my head. At one point, my parents even disowned me, and I had to be raised by wild ocelots.

When I was sixteen, my parents kicked me out and sent me off on the greatest adventure of my life! I was heading to a golden land of opportunity; a land with a pioneering spirit which welcomed misfits like me... but I ended up in America instead.

My love life there was disappointing. At one point, I dated a girl named Linda. It didn't turn out well, but she was the one who gave me the idea to take over the Tri-State Area! I eventually married a girl named Charlene, and had a baby girl named Vanessa. Unfortunately, Charlene and I got divorced due to different interests. Specifically, I was interested in a tomato sock puppet, and she wasn't.

Mr. Tomato: You know, it wasn't me she didn't like.

Shut up! But on the bright side, Charlene still regularly gives me alimony checks, which turned out to be useful for funding all my evil inventions. After all I had been through, I finally decided to truly pursue evil. Thus began my career as an evil scientist!

But one day, when I was getting my picture taken, I met my nemesis: the secret agent Perry the Platypus. All summer long that semi-aquatic mammal has been constantly thwarting my evil plans. But that's going to change with my latest evil scheme...

You might be wondering what that is. Well, you're looking at it; it happens to be this exact page. As I already mentioned, TV Tropes Will Ruin Your Life . By activating the Ruin-Your-Life-Inator, the tropes on this page shall distract all the people of the Tri-State area forever! All of them, including my brother Roger the mayor, will be unable to perform their day-jobs! And with them all distracted, I will be able to waltz in, and TAKE OVER THE TRI-STATE AREA!!!

Time to activate the -inator!

Wait, what? An escape clause through advice in another article? NOOOOO!!! Curse you, Perry the Platypus!!!