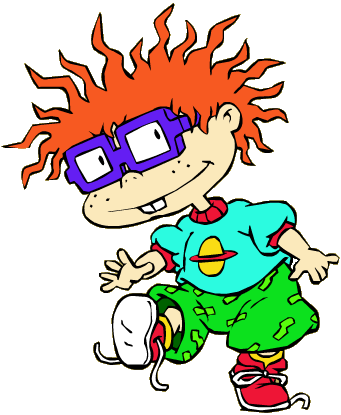 A picture of me.
Um...hi, readers. My name is Chuckie Finster, and this is my page on the Interwebby-thing.

I should probably tell you about me. Well, I'm only two years old, and I live with my mommy, daddy, my adopted sister Kimi, and our two doggies Fifi and Pepper.

My friends are this boy named Tommy who's a bit younger than me but much braver, his little brother Dil, Phil and Lil who are twins that live next door to Tommy and Dil, a very smart big girl Susie, and Tommy's older cousin Angelica. Okay, I am a bit scared of Angelica, because she's quite mean, but she's my friend anyway. Tommy's the bravliest, but they're all more bravely than me, but that's okay, I'm used to not being brave.

I like to play in the sand, on slides and with blocks, but don't like it when people puts blocks where they're not susposed to go. My favouritest toy is a bear called Wawa. I don't really like new things, 'cause I find them scary, but they're okay or even good when I gets used to them. Oh and big me is gonna share this page with me.

Tropes about big me