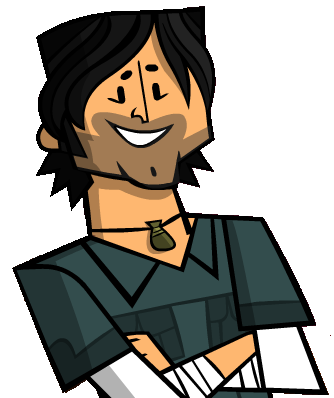 Aren't you lucky to be in the presence of a celebrity!
"Chris McLean is the best host ever! How'd you get your own show?! You stink!"
— Steve the Yeti and definitely not me, TDA: Aftermath: Trent's Descent

Last time on Total Drama...huh? What's this? TV Tropes? Um, my agent didn't say anything about doing this. I was SUPPOSED to be hosting a show here! McLean out!

Phone rings with the theme of Total Drama Island playing.

Hello? What's that? I AM getting paid for doing this? And a surefire spot as host in the next season? Well... I guess I can manage but you have to include a clause where I am to not be held accountable for anything that happens to the contestants on the next season! For-ev-er! You agree? Awesome!

Okay! Change of plans! Looks like I DO have some time to spare. But hurry up! My hot tub isn't going to help me relax without me being in there! But I guess I better give out an introduction first. Ahem! I am Chris McLean! The Host with the Most and I am the host of the Total Drama Island series. After my steller performances from my older days, the company has begged for ME to host their show! Throughout the seasons, I meet different cast members whom I all despise and love to torture! Many people believe my sadism has gotten worse over each season but rest assured, I still my same old self! Until I was thrown in jail for an entire year!

Anywho, time to wrap this up as I have a date with a hot tub that is best enjoyed hot! Will I answer all necessary tropes to satisfy the reader? Will this only show how much of a sadistic person I am? Will I greatly regret even doing this in the first place? Found out right here on Total Drama TV Tropes!

Here are the tropes that best describes me! The Host with the Most!

There! I am done with this! McLean out!