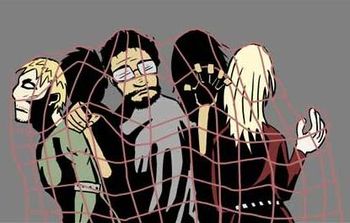 This happens a lot... Artwork by Alex Claw

The parodic adventures of the members of the AlternateHistory.com discussion board. Imagine Star Trek if everyone on board was a pornography-obsessed stoner. And every episode was that "Mirror, Mirror" one.

The show's main influences include Red Dwarf, Discworld and Sliders. It has, oddly, "outlived" many real TV shows, having recently begun its fifth season with over 120 episodes produced.

New episodes of the Series are published on the main AH.com site, viewable only by members, but the Series has now acquired its own site

, where remastered versions of the old episodes

will gradually be posted, complete with snazzy new title card artwork. The complete overview of the series can also be found on this page

of AH.com's wiki (including an episode guide

The series also has a character page.

AH.com: The Series provides examples of the following tropes: