The Chick Magnet Quintet is a Five-Man Band of the biggest Chick Magnets in the Pantheon made to counteract the now dismantled Yandere Quartet. Created by Hyodo Issei and Negi Springfield and led by the formernote Negi declined the place as leader, and chosen the place of vice-chief, not only to directly oppose Tsukuyomi alongside Hayate, he thinks Issei has all it takes to be a very charismatic leader. They are allied with the Special Lovers Squad due to their shared opposition to the Yandere Quartet and both Setsuna and Rias being part of both the Quintet's Battle Harem and the Squad's Division 2. Oh, and by the way, they qualify as a sitcom Five-Man Band due to their antics.Recent events show that Negi Springfield has become possessed by The Mage of the Beginning and has ended up in the GUAE Re Education Facility as a result, leaving them back to a Four-Man Team and having Ange take over Negi's position. Now their goal is to free Negi from her grasp before she possess him completely. Alongside them are their own haremettes and Hero Secret Service. These girls (and Tusk), are here to fight along side the Chick Magnet Quintet, and bring in any kind of support available.

The members of Negi Springfield's harem. Composed of his own students] of [[AlwaysInClassOne Class 2-A, later 3-A.

The members of Issei's battle harem. Composed of Rias's and Issei's Peerage, as well as other love interests.

The members of Hayate's battle harem. Composed of his former master Nagi, and Hinagiku.

The members of Ichika Orimura's battle harem. Composed of fellow IS Academy students, and his older sister/teacher Chifuyu.

The Special Lovers Squad is a squad of two divisions who would do anything to protect their loved ones out of well-indented love and passion.

The formation of the group was planned from a long time ago, ever since Nyarko (the one who spearheaded this group's formation) ascended into the Pantheon. However, the events regarding the corruption of Gentaro Kisaragi made Nyarko put it on hold to focus on events, and was formed right away after the destruction of Friendship Asylum. The group was also originally composed of four members, but it quickly grew double its side due of another faction formed by Hungary, in addition to couple of extra members.

It is essentially the good counterpart to the now debunked Yandere Quartet, which came back as Yandere Squad. Also compare with the Chick Magnet Quartet, with which they are allies due to both Setsuna and Rias being part of its Battle Harem.

Division 1 consists of some of the clingier girls of the Pantheon. Trying to hit on their love interest is a bad idea. Trying to harm them is even worse, usually resulting in the offender getting bludgeoned with a crowbar, punctured by needles, be stabbed with a sai, washed away. kicked a lot and then hit by torpedoes somehow, not necessarily in that order. Nyarko also demands that they pick a color to make them more sentai-like.

Division 2 consists of some of the more protective girlfriends in the Pantheon. Trying to hit on their love interest is also a bad idea most of the time, and trying to harm them will usually end in being bludgeoned by a frying pan, sliced by a katana or a magical sword/punctured by flying tanto, sliced by a chainsaw or an axe, sliced by dual katanas, and being blasted to oblivion with the Power of Destruction, again not in that order. They also have a designated colors, simply because they can. 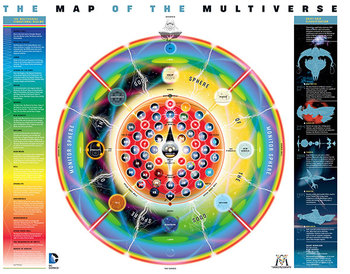 A Map of the DC Multiverse