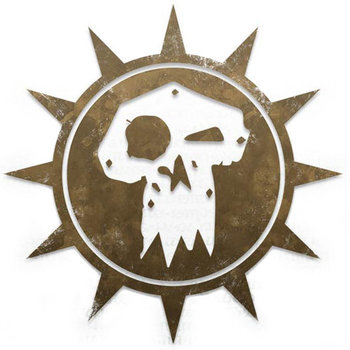 open/close all folders
General Destruction Tropes
Gorkamorka
The fused form of the orruk twin gods, Gork and Mork, Gorkamorka is a two-headed deity who is both brutally conning and cunningly brutal. He was found by Sigmar, early in the Age of Myth, entombed in a vast mass of living amber; after the other god dug him out, the two deities proceeded to beat the living daylights out of each other in a twelve day battle, after which Gorkamorka readily agreed to join Sigmar as the pantheon's monster-hunter and troublesmasher. This worked fine until it didn't, as the easily bored god eventually grew fed up with not being allowed to fight whoever and whoever he pleased and went on a one-man Waaagh! from one end of reality to the other and then right back again. Nowadays he eagerly encourages his green-skinned followers to be as ferocious and bloodthirsty as they can be, tearing down the worlds' empires for the sake of the fighting needed to do so. 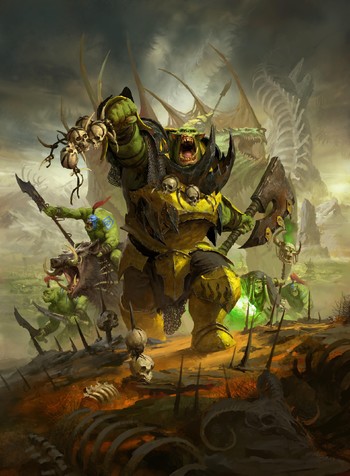 Brutal greenskinned humanoids, orruks are a race totally dedicated to war that rampage across the realms in search of nothing more than a good fight. There are a number of different breeds of orruk, of which the armoured Ironjawz and feral Bonesplitterz are the most well-known, and all of them thrive on combat, growing bigger and stronger as they fight. Living in nomadic warclans, orruks have brought ruination to countless civilisations since the Age of Myth when they fought alongside their Great Green God Gorkamorka himself and they still dream of the day when enough of them join together in a new Great Waaagh! to fight alongside their dual deity once more and smash the realms asunder. 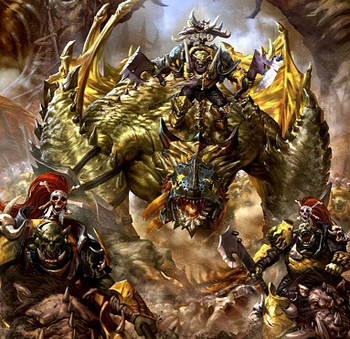 Dem gitz Sigma', Nagash an' Archaon are in for som' propah Gorkamorkan krumpin'!

Originating from the savage plains of Ghur, the Realm of Beasts, the Ironjawz are the largest and most powerful breed of orruk. Clad in crude but effective suits of plate armour, the Ironjawz consider themselves to be Gorkamorka’s elite warriors and they can always be found in the thick of the fighting, tearing the heart out of the enemy battleline with brute strength and huge choppas. 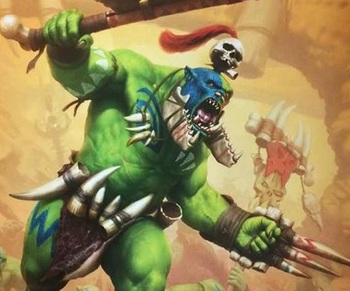 The Beast Hunters of Gorkamorka

Those orruks that lose themselves completely to the energies of the Waaagh! will be cast out of their warclan and join one of the roving Bonesplitterz warclans that rampage across the realms. Ruled over by mystical prophets and shamans, the Bonesplitterz fanatically hunt the great beasts that inhabit the realms, believing that their bones contain raw Waaagh! power that they can tap to invigorate themselves. 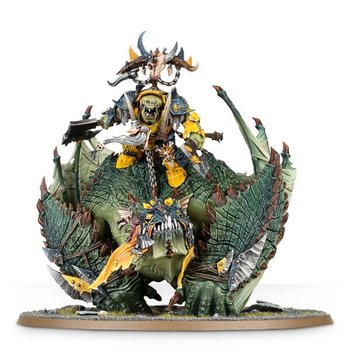 The biggest and toughest orruk in the Mortal Realms, Gordrakk is the Megaboss of Megabosses, the leader of the Great Waaagh!, and the chosen champion of Gorkamorka whose followers include all worshippers of the Great Green God, not just orruks. An unstoppable force of destruction, Gordrakk fights from the back of the massive and foul tempered Maw-Krusha Bigteef, crushing all those who stand against him and leading his numberless horde against the forces of Chaos, Death and Order alike.

Leader of the Ironsunz Warclan, one of the mightiest of all Ironjaw warclans, Dakkbad Grotkicker is as cunning as he is powerful. Rising to power after he tricked the previous Ironsunz Megaboss into being eaten by a Maw-krusha, Dakkbad has led his boys from strength to strength, bringing death and destruction to every one of the Mortal Realms except Sigmar's bastion of Azyr.

A tribe of subterranean grots, the Moonclan worship the Bad Moon, the only thing in the Mortal Realms that proved too tough for Gorkamorka to eat. Emerging from the caverns beneath great mountains, that they believe are the broken teeth of Gorkamorka, the Moonclan attack the kingdoms of the Realms, making great bonfires of their cities and feeding their populations to ravenous squigs. 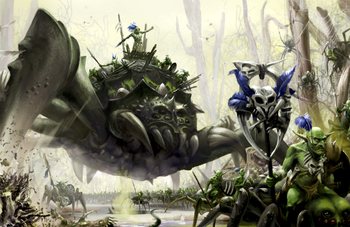 The Spiderfang tribes of Grots worship the great spider that once bit Gorkamorka on the foot and absorbed a portion of the god's power. The Spiderfang Grots live in web-choked lairs beneath the ruins of the civilizations that they have destroyed and ride into battle on the backs of the arachnid monsters that they worship.

Aleguzzler gargants are the largest known humanoid species of the Mortal Realms who stomp around the landscape absentmindedly destroying anything in their path while continuously drinking any alcohol they can lay their oversized hands on. Large, dumb and quick to anger, gargants follow the tribes of orruks and ogors into battle for the promise of vast quantities of alcohol.

Disgusting and stupid creatures, Troggoths are children of destruction that gather in darkest places of the realms that emerge from their lairs only to destroy and eat anything they come across. Many races of Troggoth plague the Mortal Realms with the ruin dwelling Sourbreath Troggoths being the most numerous, but the amphibious Fellwater Troggoths and the mounting dwelling Rockgut Troggoths are also relatively common. Troggoths are instinctively attracted to the destruction of battle and can often be found accompanying Orruk tribes when they march to war.
Characters

The majority of ogors are members of the Gutbuster tribes. These nomadic empires wander the Mortal Realms, stealing, killing and destroying as they please. The Gutbusters worship Gorkamorka as the Great Beast that Consumes the World and they seek to help their ever hungry god devour everything in the realms. 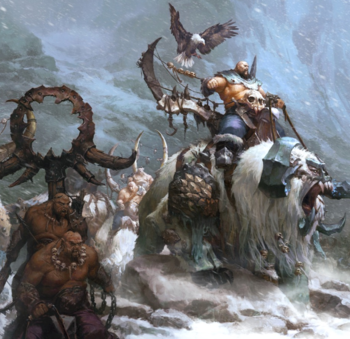 Heralds of the Everwinter

An ogor cult that worships the Sun-eater aspect of Gorkamorka, the Firebellies dream of emulating their god by consuming a sun themselves. Until they can achieve this feat, Firebellies make do with eating fiery beasts and volatile minerals that grant them the ability to breathe fire over their victims.

Ogors who have left their tribe to partake in the of the life of a mercenary, Maneaters travel from conflict to conflict, fighting for their own entertainment as much as their pay. Wandering the Mortal Realms alone or in small groups of like-minded ogors, Maneaters have a reputation as gluttons and thieves but their abilities in battle are such that there are always lord s and generals willing to hire their services. 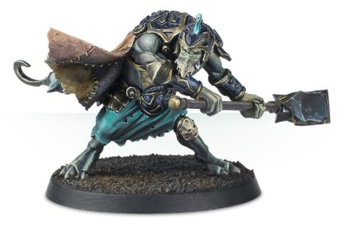 Daemons of the Mists

Large, reptilian monsters that sport a single baleful eye and a prehensile tail, the Fimir are degenerate creatures of destruction that make their homes in mist shrouded bogs and swamps.