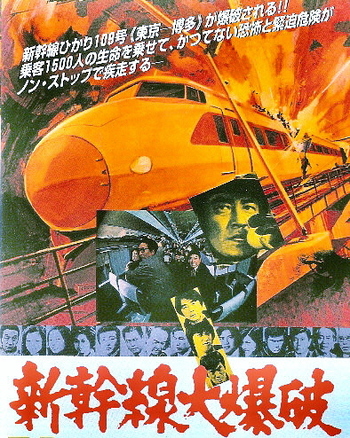 On an otherwise normal day, Japan National Railways recieves a threat: two bombs will explode on a pair of trains; one on a Hokkaido freight train and the other on the Hikari 109 bullet train (or shinkansen) from Tokyo to Hakata. When the first train mysteriously explodes, the company alerts the driver, Aoki (Sonny Chiba), who's running a normal train run with 1,500 passengers on board. But to make matters worse, there's one more caveat to the bomber's treat: the train will explode if it slows down to 80 mph.

And thus begins an epic high-stakes manhunt as the Tokyo MPD try to hunt down the bomber while Okita and the train's crew try to keep a lid on the situation, which is easier said than done with 1,500 passengers wondering why they aren't stopping. Elsewhere, the bomber, ex-businessman Testuo Okita (Ken Takakura) along with his co-conspirators Masaru Koga and Hiroshi Oshiro are planning on getting a $5,000,000 ransom from their threats as they soon become wanted all over Tokyo.

If the plot sounds familiar, it should; the film was indeed the inspiration for Speed. It was even released in France and the US the following year, albeit in highly truncated form.