Saved content of the page (everything inside "Page Source")

The Boot Camp Episode, which has Ren and Stimpy surviving boot camp by a particularly tough sergeant.

This episode features the antics of Ren and Stimpy's favorite food mascot.

In The Army contains examples of...

Ren doesn't bother to brush his teeth at all, so his teeth fall out.

George Liquor (American) buys Ren and Stimpy from a pet store and disciplines them in various ways.

Ren and Stimpy are outlaws hired by a couple of cowboys named Abner and Ewalt.

The duo are Exactly What It Says on the Tin

Out West contains examples of... 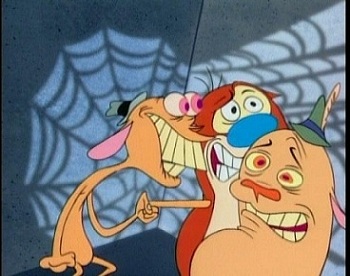 but first, FIRST...
Ren: Yooouuuuu!!! Both of youuuuuuuuuuu. Oh, what I'm going to do to you. I'm so ANGRY! First, I'm gonna tear you lips out. Yeah, that's what I'M gonna do. And THEN, I'm gonna... GOUGE YOUR EYES OUT!!!! Yeeahhh... that's what I'M gonna do.
Stimpy: We don't like this, Ren
Sven: Ya. You scaring us.
Ren: Good. You're scared, huh? Next, I'm gonna... TEAR your arms out of the sockets! And you wanna know what else? I'm gonna HIT ya. And you're gonna falllllllll. And I'm gonna look down. And I'm gonna laugh.
—Ren's infamous To the Pain monologue.

"Sven Hoek" is the fourth episode of the second season of The Renand Stimpy Show. It is the first episode to be finished after John K. was fired in the show's original run.

Stimpy's stupidity has really started to get on Ren's nerves. He anticipates a fruitful visit from his intellectual cousin Sven, but Sven turns out to be as dumb as Stimpy. Stimpy and Sven immediately become the best of friends, sharing their collections of spit and nose goblins, and revealing that they're both members of the Loyal Order of Stupids. This serves to make Ren even angrier and fed up.

When Ren leaves for work, Stimpy and Sven play hide-and-seek and spend time in Stimpy's litterbox. Later, they fight the boredom of a rainy day by playing "the funnest game in the whole wide world", "Don't Whiz on the Electric Fence". Ren comes home to find the house a complete mess, and his collections of opera records, incurable diseases and dinosaur droppings ruined. Enraged, Ren confronts Stimpy and Sven and outlines the horrible and violent things he has in store for them, only to break momentarily to pee.

Three bumpers air with this episode to bring it up to standard length: A new Log commercial promoting new products, a Gritty Kitty litter commercial featuring some of the fabulous prizes waiting inside each bag, and and a new "What Will We Do Til Then?" bumper where Stimpy inflates himself like a balloon.

Ren and Stimpy go to stay in this enormous old mansion where a ghost tries to scare them... and fails miserably every time.

The duo are wrestlers.

Ren and Stimpy pretend to be babies in order to live a better life.

George Liquor enters the duo into a dog show (even though Stimpy's a cat).