Being that his game was devoted to killing the scientists from Half-Life There are a lot of ways to do so, and a lot of weapons you pick up along the way (or if you started off with them using Impulse 101). Some weapons even feature special tertiary fire functions using the mousewheel button.

Crowbar: Nothing much changed from the Half-life variant, just feels fun to smack scientists with this though. Also commonly used to smash frozen sci's.

BFS: A sword, with the same swing speed but slower speed when hitting objects. It does higher damage and, when aimed correctly, cut a scientist's head or torso off.

Pistol: Like the one out of Half-Life, nothing new.

357 Magnum Revolver: Similar to the pistol example but features the ability to zoom like Half-Life Deathmatch. Shooting a sci in the head will blow it off.

Laser Pistol: Indicated by the silencer in front and the variable glow around it, the primary fire isn't very exciting, but the secondary fires a force web that do variable, (mostly) One-Hit Kill attacks on a target. The red force web emitter flings the target around, slowly chipping away at the health of the target until it runs out (or collides with another), gibbing it (as well as the mentioned target if it collides with it). The green force web lifts the target into the air, flailing it around before gibing it. While the blue force web drills it into the ground.

Repulsor: One of the first weapons you start out with, the ammo regenerates, primary fires a repulsor beam that reflects off walls and can knock scientists around, occasionally into hazards. While the secondary fires a lethal version of it. Tertiary fire activates a tractor beam, which can be extended or retracted with primary and secondary. (Uses the gauss cannon viewmodel with a green glow)

Soft Metal Accelerator: A small pistol that fires a soft metal, uranium slug at high velocities. A hit will give the target radiation poisoning. (Uses the Opposing Force Deagle viewmodel)

Submachine gun: The primary fire is the same as it was in Half-Life while tertiary fire changes the grenades used by secondary fire, ranging from standard HE, incendiary, plasma bomb and laser.

Shotgun: The primary and secondary remain the same but the tertiary fire changes the ammo from conventional (fire one shell/fire two shells), to explosive (Fire one explosion/fire many explosion), to laser shots (fire some lasers/fire many).

Crossbow: Remains the same but features change-able ammo similar to the SMG and Shotgun, including; standard, explosive, flare, electric, and laser web (connects lasers between eachother, best for small corridors and halls).

Sniper Rifle: Modeled after the Opposing Force version but functions similar to the one from Team Fortress Classic, utilizing a laser sight as the shot gains power the longer the fire button is held down. Tertiary fire uses some of the players rockets to construct either a anti rocket box, an anti grenade box, or a mini rocket launching box.

RPG: Features the ability to change warheads (ranging from HE, incendiary, plasma bomb, EMP) while secondary changes the rocket from being unguided, laser guided, heatseeking or remote controlled.

Flamethrower: Fires a constant stream of flame, secondary fires a stream of acid to melt the flesh away from your target. (Uses an orange glowing gluon gun viewmodel)

Freeze Ray: Fires incredibly shiny projectiles which starts to freeze a target, chipping at their health before it wears off or drops to zero, at which point, you can use any other weapon to shatter their frozen body. (Uses a light blue glowing gluon gun model)

Grenade: Primary throws one, secondary lobs an incendiary version while tertiary changes so cluster (TFC M.I.R.V/scatterbomb which release very small, contact sensitive bombs, and a lot of them to make up for their small damage) to shockwave. (TFC Conc. 'nade/EMP 'nade).

Tripmine: A mine which uses a beam to set itself off when broken, alt fire places a wall sentry that fires lasers.

Gluon Gun/Egon: Similar to the Half-Life example, secondary fire changes the beam to either Anti-matter pulverizer or Ion Cannon, which locks onto a target.

Gauss Cannon/Tau Cannon: Similar to the one in Half-Life, explosive overcharge and all, along with the ability to gauss jump like in Half-Life Deathmatch

Laser Cannon: Fires five beams that refract off of walls, making it rather uncomfortable in a close space while secondary fires a laser that can penetrate through walls. (Uses a light blue glowing gauss viewmodel)

Displacer: Returning from Opposing Force, the displacer teleports whatevers hit by it to an unknown location (along with the destructive shockwave that follows), while the self-teleporting secondary fire is replaced by the ability to shoot a light disk that slices scientists in half while seeking them out.

NA Implosion Rocket Launcher: Fires a heatseeking rocket that produces a devastating, high energy detonation. while secondary fires a rocket that creates a vortex upon contact, sucking anything (except the player when holding the launcher) into it and annihilating it.

Hornet Launcher: The secondary fire is replaced by the ability to change the color, ranging from, red (seeking), orange (fire), yellow (plants itself in a sci's head and blows it off), green (no seeking), blue (richochet), light blue (ice).

These are the guns available to you when you start a new game. Only one can be selected each game.
Peas and Carrot Pistol 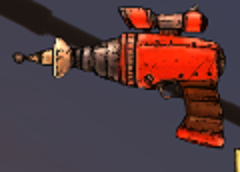 Standard issue. Choose a better gun.
This weapon fires a decent energy projectile at max level that is not suitable for swarms of enemies, unless is modded with TNT, Spread Shot, or so. 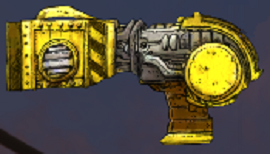 Loaded with Sawblades, not Pizza.
This weapon fires a fast sawblade projectile. Your starting weapon of choice before unlocking some of the others.

Gibberish, as in, gibs
This weapon is unlocked after killing 24 tanks.

These are the guns you may find during gameplay. There is no limitation on the number of these guns you can carry but you are restricted to change weapons by cycling through them, so having too many guns might become a problem.
Absurditron 9000
GG 9000
The Motivator
Old Painless
The Panflute
Shrapnel Trumpet
Smoke Shifter
Grasshopper
Trollhunter
Partybringer
XP Launcher

These have different effects and must be recharged after every use by collecting yellow orbs.

Over the years, Valve has added a lot of new content to keep Team Fortress 2 going. As a result, each class has received a lot of guns, food, and even jars of urine to bring to the battlefield. In order of the class selection menu, here's what the team has:

open/close all folders
All classes

finite ammunition, but must be recharged with a slide pump and it effectively has a clip size of four shots.