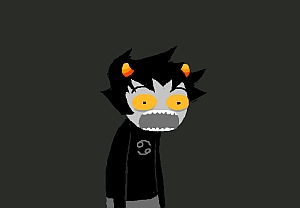 Something big just happened? YOU HAVE NO IDEA.

> Respond to the story's events.

Homestuck is a work of over 8000 pages, and the audience has been along for quite a ride. These tropes include some of the many reactions.

You cannot hope to defeat Homestuck in a wham-off. It is simply the best there is. We are all completely blown away by these stunning revelations.

Most works get one or two wham episodes to set the tone, or shock the fanbase. Homestuck had so many that it was the first TV Tropes page to have its own subpage. That does not stop any wham episode from being any less wham-y.

Note: Please organize Wham Episodes by which Act they are in, so we can make a more chronological list. Also, be careful what you add; Hussie likes to subvert this trope.

Oh Jegus, how can simple words be so plot-twisting?

Homestuck also has plenty of surprises that are confined to fleeting moments.

Andrew Hussie is an undeniable master of the emotional whipkind abstratus.

Homestuck is so full of these, it's getting to the point that laughing at anything is a dicey proposition. Not that that will stop us.