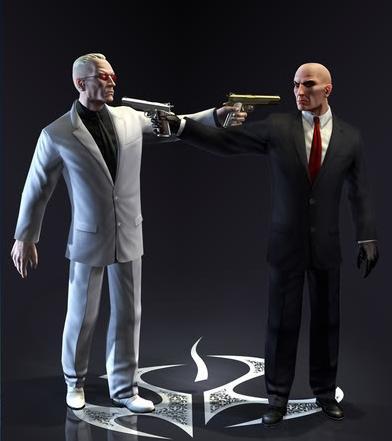 Send a killer to catch one.

Hitman: Blood Money (2006) is the fourth game in the Hitman series by IO Interactive.

Our narrator is former FBI director Alexander Cayne, the man who claims to have caught and killed "Mr. 47." The timeline is full of false leads and near-misses, but he finally bagged 47 during an attempt on the U.S. President's life. As he's recounting his exploits, we flash back to the Paris opera, where 47 was gravely wounded before fleeing Europe.

After a pit stop in Chile, the manhunt picks up in the United States, beginning with a minor hit in Baltimore and zig-zagging its way across the country: first a visit to California to rub out some mobsters, and onward to a political rally in New Orleans, a Christmas party in the Rockies, the swamps of Mississippi, the underbelly of Las Vegas, and finally the Oval Office itself.

It was a radical change from previous Hitmans, as the series began moving away from its PC gaming roots. The fixed camera is gone, allowing 47 much greater mobility than before. The difficulty is also more balanced: 47 sneaks faster than in prior games, and guards aren't quite so anal about disguises (they won't bust you for carrying the wrong make of gun, and strolling is no longer part of a disguise). A new way to keep your low profile is to make hits look like "accidents", such as rigging a grill to explode, or shoving targets off high ledges. Bodies found as a result of accidents do not count toward your total. Among other improvements:

Blood Money also has an unusual newspaper feature. Every time you finish a mission, you will see a headline with all the details of your mission. When your notoriety level is at a minimum, you can enter levels normally. The higher your notoriety level, the harder it is for 47 to blend in. Notoriety increases when you leave witnesses to your crime alive or un-sedated, or you get caught on CCTV cameras and don't destroy the evidence.

Originally released for PC, Playstation 2 and Xbox, the game has been remastered twice: first for the Hitman HD Trilogy for PS3 and Xbox 360 in January 2013, which contained this game, Contracts (a semi-remake of the first game), and Hitman 2: Silent Assassin, all of which received the standard HD remaster treatment. In January 2019, the game and its sequel (Hitman: Absolution) can also be purchased for the PS4 and Xbox One in the form of Hitman HD Enchanted Collection, which upgraded the games to 60FPS 4K resolution, among other graphical improvements.

open/close all folders
In General
Prologue: Death of a Showman
Chile: "A Vintage Year"
Paris: "Curtains Down"
California: "Flatline"
California: "A New Life"
New Orleans: "Murder of the Crows"
Colorado: "You Better Watch Out"
Mississippi: "Death on the Mississippi"
Mississippi: "Till Death Do Us Part"
Las Vegas: "A House of Cards"
Las Vegas: "A Dance with The Devil"
Washington D.C: "Amendment XXV"
Baltimore: "Requiem"