The Lady Of Pain
The Lady of Pain, Goddess of Might Over Explanation (The Lady, Her Bladed Serenity) 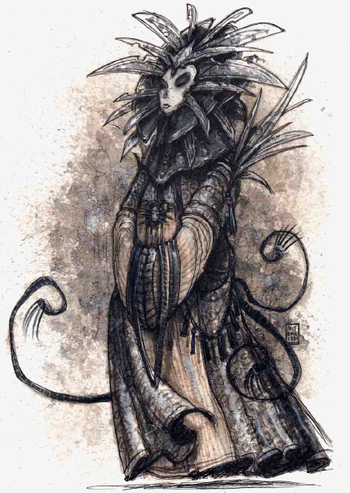 Ideas (feel free to use):

WIP OP for a forum game that I am working on

The year is 20XX. Thanks to the innovations of Miara Industries, people and video game characters, known as "Sprites", live in peace. However, reports have popping up involving Sprites randomly attacking people out of the blue. That's no problem for Miara, as they have assembled a team of misfits to investigate the reports. You can be a common mook, a mon, a huge dragon, or just a regular human, but you all have equal potential in the world of...

Welcome to TV Tropes' eleventh "official" Roll to Dodge, New Game. Unlike the Journey To The West-inspired ninth installment or the Earthbound-themed tenth installment, this Roll to Dodge takes place in a world where video game characters live with humans.
[1] - Epic Fail. The action was not performed, and backfired horribly.

[3] - Partial Success. The exact degree of success is established by the GM.

[4] - Success. The action was carried out adequately.

[5] - Epic Success. The action succeeded in the most positive way possible.

[6] - Overshot. Though the result was achieved, the action backfires horribly due to disproportionately large effort.