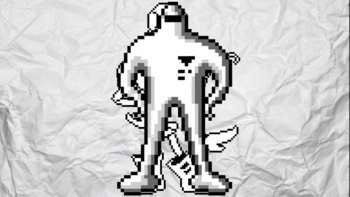 They match perfectly... except for the parts that don't.
"You know, try as I might, I openly admit that I occasionally get things wrong on this channel. When you've done nearly 200 episodes covering topics as diverse as helicopter physics to gemology and ancient history to hacking, then you fuse those with franchises that have lasted literal decades with each installment involving 60+ hours of gameplay per game, and do that weekly to meet the unforgiving treadmill of YouTube, well, things unfortunately slip through the cracks. #Excuses."
— MatPat, "The Pokédex is FULL OF LIES!"

Despite calling itself "The Smartest Show in Gaming", MatPat's Game Theory manages to make quite the substantial amount of false claims.

open/close all folders
DeadLock; Pokémon: Which Gen 1 Starter is Truly the Best?
DeadLock; Team Fortress 2 vs Overwatch
While not exactly a Game Theory video, MatPat's Deadlock

video about Overwatch vs Team Fortress 2 has gotten a lot of flack from both fanbases because of really poor research on both games (mostly TF2 though). There are some good, more entertaining videos in response to the subject by V3rbify

.
UNDERTALE - Sans's SECRET Identity!
This Undertale theory, coming to the conclusion that Sans is Ness, overlooks several factors in the things it cites, and at several points just ignores the lore outright.

Phoenix Wright is a CRIMINAL!!
Zelda Theories
For Honor and Historicity
MatPat's video on For Honor about who would win a fight between Vikings, Knights and Samurai had so many mistakes, misconceptions and outright impossibilities that it would be easier to list the things he got right.
Metroid Theories
Five Nights at Freddy's Theories

In a world where movie trailers don't always tell the truth, you can always trust these guys to give you the facts—except when they slack off on doing their research!

While Cracked runs on Rule of Funny, sometimes not even that will excuse blatant lack of research. The worst thing, is that they rarely, if ever, fix articles after being called out for inaccuracy or bias. This is compounded by the fact that the site is not written by one person, so anyone can write for it, regardless of their knowledge of the subject at hand.