Due to my decision to resign from the Trope Pantheons, all pending profiles are up for adoption. Editing them is allowed, provived that you don't break anything. If you desire to adopt a profile, send me a PM. 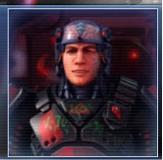 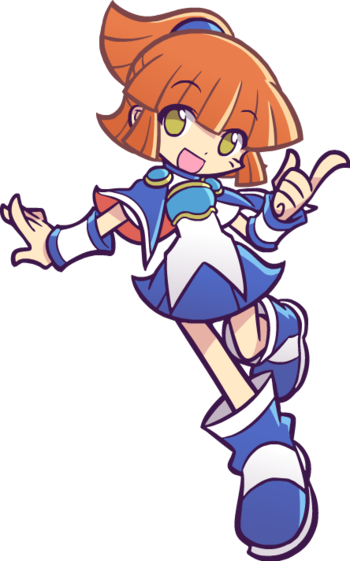 A young mage apprentice. She is known for being very optimistic, somewhat of a tomboy, and for being one of the more level headed characters in the entire cast. Despite her young looks, she is very prolific in magic, even all the way back in kindergarten. Her optimistic personality means she seemingly doesn't hold grudges towards her enemies, even towards Satan who tries desperately to marry her.Her kindness however hides her general competitiveness with playing Puyo, sometimes causing her to become surprisingly mean spirited.

Being the original protagonist of both Puyo Puyo and Madou Monogatari, she has a very prolific track record throughout the years, with only Carbuncle and the Puyos themselves rivaling her. This caused her to become an unofficial "mascot" for the Puyo Puyo series alongside those aforementioned characters, especially during Compile's run. 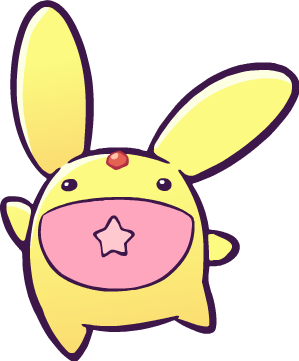 The yellow rabbit Mascot of Compile-era Puyo Puyo games and Compile in general. He is a mysterious creature that used to be Satan's pet, until Arle found him in Madou Monogatari 1-2-3 and decided to join her. However Satan became saddened that Carbuncle left him, with getting Carbuncle back becoming one of his motivations to marry Arle. He is known for having a strong bond with Arle, but will still run off on his own to cause mischief, especially if it involves looking for his favorite food curry. 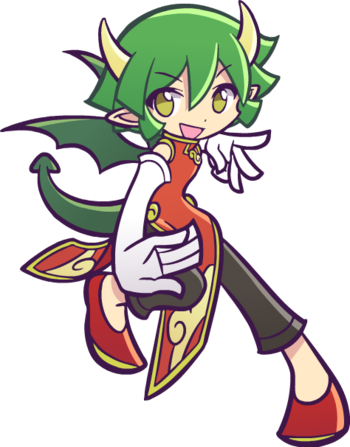 A dragon girl who is obsessed with beauty contests, despite her rather boyish looks. She is constantly challenging Arle to beauty contests, whether provoked or otherwise, creating a one-sided rivalry. Despite this she's somewhat of a ditz, constantly mixing up Puyo battles with beauty contests and being infamous for having very weak Puyo skills. But this is all offset by her being deceptively effective at martial arts, in particular being prolific in devastating punches. 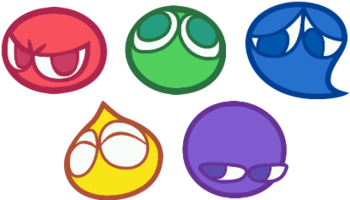 The titular slimes themselves. Puyos are mysterious creatures that are seemingly everywhere and in endless supplies. On their own they're nothing special, but when 4 or more of the same color combine they pop. This quirk can be taken advantage by magic users to amplify their power, hence why they're commonly used in matches in the Puyo Puyo universe.

Naturally Puyos are extremely prolific to the series, appearing in every single game and being commonly used for promotional purposes. 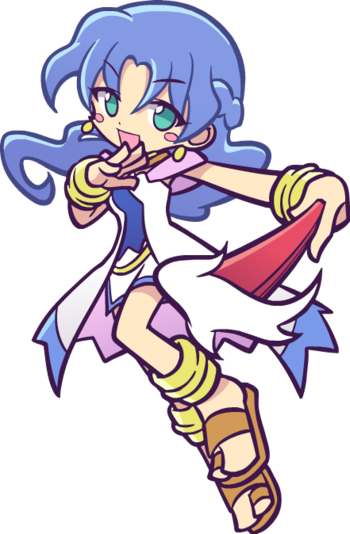 The self proclaimed "Fighting Queen" Rulue is a beautiful young woman that, true to her title, is an expert at hand-to-hand combat. Her powerful punches and kicks compensates for having weak to non-existant magic, contrasting the majority of the cast. A notable trait is her obsession with marrying Satan. Madou Monogatari ARS' reveals that her obsession is stemmed from Satan rescuing her in the past, and since then she has been determined to become stronger so she could one day marry him. Despite this, her approaches have constantly been shot down, causing her to become increasingly frustrated. Satan's strong obsession with Arle in particular is a sour spot for her, creating one of Arle's most persistent rivals in the process. 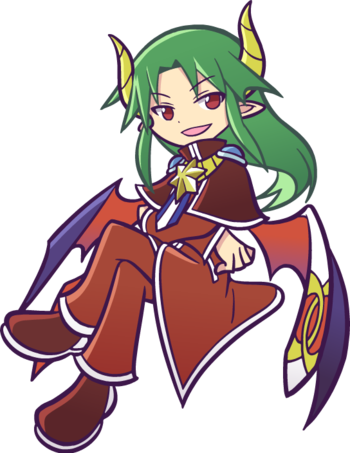 The ruler of Puyo Hell (aka Puyo Underworld). The Dark Prince Satan, also known as simply Dark Prince, is a powerful sorcerer and the residential villain of the Puyo Puyo series (if you can call him that). He normally acts indifferent towards other characters, with the notable exception of Carbuncle and Arle. His ultimate goal throughout the series is to marry Arle and get back his former pet Carbuncle, but his approaches always fail due to a combination of Satan creating far too ridiculous plans to win over Arle and Arle herself simply not having any interest to begin with. 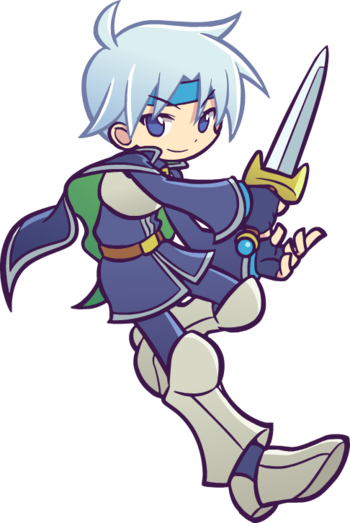 Schezo Wegey is a mysterious dark mage that wields a powerful sword simply called the Dark Sword. His ultimate goal is to become the most powerful sorcerer, resorting to all measures to achieve his goals, in the process being yet another target towards Arle. Normally he tries to pull off a dignified facade in order to be more intimidating to others, and exemplify his status as a powerful mage. However, he has gained infamy as a pervert/creeper for his crass choice of words, unintentionally being laced with sexual innuendo that either baffles or scares others around him. His facade is also broken if he sees anything cute. 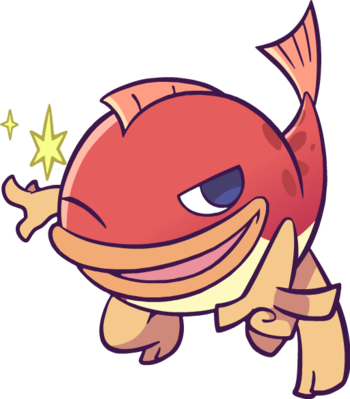 An armed-and-legged pollock that loves to dance and talks in slang. He normally appears throughout the series as a comic relief of sorts, either because of himself being abused in some fashion or simply showing off his awesome dancing abilities. He is normally a carefree individual that simply wants to show off his dancing skills and likewise wants to see others dance too, but does show a more selfish side on occasion. 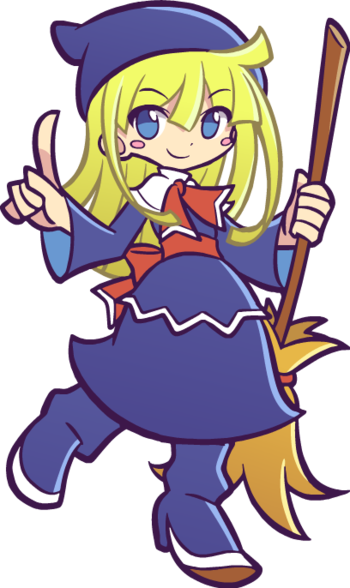 Witch is... well, a witch. Specifically, she is a young witch-in-training, constantly hunting for new spells to learn and potions to make. Her ultimate goal is to graduate into a full-fledged comet witch. However, she is rather mischievous when it comes to achieving her goals, going as far as to cheat in order to win, scamming customers on rare occasions, or even casually causing misery to others. She's yet another rival of Arle, due to Witch wanting to beat Arle in magic.