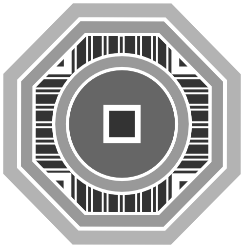 "Anyone who crosses our borders, or stands in our way, will be crushed."
Following the Earth Queen's death, the Earth Kingdom collapsed into anarchy, divided and full of bandits harassing the population. Zaofu being the last state untouched, the world leaders approached Suyin and asked her to take over, reunite the kingdom and bring back order in preparation for Prince Wu's ascension to the throne. When she refused, her captain of the guards, Kuvira, volunteered to do it instead. Despite her rather drastic methods, she proved effective at the task, gaining popularity as "the Great Uniter". When the time came for Prince Wu's coronation, however, she refused to hand over power and proclaimed herself the new official leader, renaming the nation Earth Empire.
Kuvira 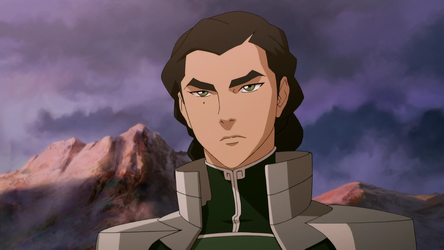 "I was cast aside by my own parents like I meant nothing to them. How could I just stand by and watch the same thing happen to my nation when it needed someone to guide it?"
Voiced by: Zelda Williams

The founder of the Earth Empire, and the main antagonist of Book 4. Raised in Zaofu by Suyin herself, Kuvira was a captain in her metalbending corps, as well as one of the members of her dance troupe. After the fall of the Red Lotus and the Earth Kingdom's descent into anarchy, however, her loyalty toward Suyin was shaken when the leader of Zaofu refused to help reuniting the Earth Kingdom, feeling this would be acting like conquerors. After failing to convince her otherwise, Kuvira interpreted Suyin's refusal as cowardice and left Zaofu with Baatar Jr. and part of the city's force to do the job herself; she was eventually recognized by the United Republic as the temporary leader of the Earth Kingdom, in preparation for the coronation of Prince Wu, heir to the throne. Believing him unfit, she instead unites the region and reforms it as the new Earth Empire, with herself in charge. 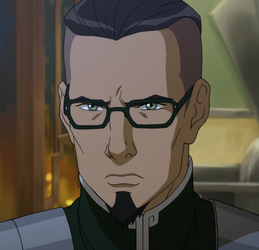 "Zaofu stopped being my home long ago. I'm ready to take it by force."
Voiced by: Todd Haberkorn 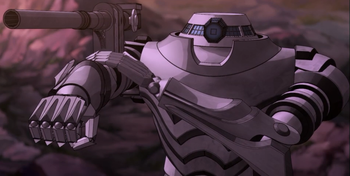 The final result of the research and development of the spirit vine weapon technology and Kuvira's ultimate weapon, the Colossus is a 25 story tall mecha suit with a spirit vine cannon attached to its right arm, with Kuvira herself as the pilot. The machine makes its first appearance in "Kuvira's Gambit", where it is used to bring Republic City under siege.