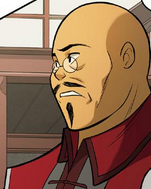 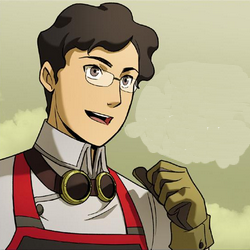 The current supervisor of a joint Fire Nation and Earth Kingdom mining operation.

A pair of sisters from the Southern Water Tribe who were friends with Katara and Sokka before the two left with Aang. Katara meets the two as they are working at Loban's refinery. 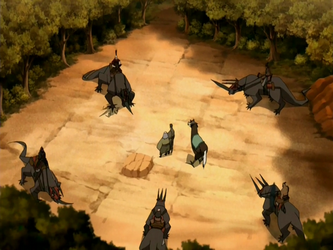 Voiced by: Malachi Throne (Colonel Mongke)
"Colonel Mongke and the Rough Rhinos are legendary — each one is a different kind of weapon specialist. They are also a very capable singing group." — Iroh

An elite mercenary group of Fire Nation cavalry that worked for Fire Lord Ozai during the war. After the war they joined the Earthern Fire Refinery to act as security detail.

The Cabbage Merchant
Voiced by: James Sie
"MY CABBAGES!!!!"

A hapless cabbage merchant whose produce keeps getting inadvertently destroyed by the Gaang. Needless to say, he's not too fond of them.