The Eldritch Abomination is a plant or fungus. Plants and fungi aren't the same thing, but artistic license says otherwise.

Go back to the main page HERE, just don't smell it. you don't know where its been. 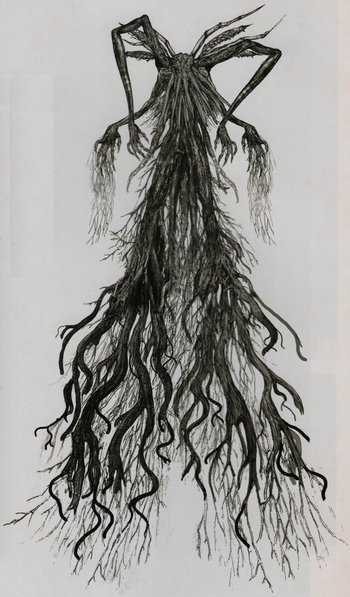 Much like Animalistic Abominations, these foul blights on everything bear a strong resemblance to commonplace life-forms, in this case that of natural flora.

Half the time these creatures are only plant-like superficially, kind of like Proterozoic Era life, blurring the lines between plants, animals, fungi, bacteria and the other things. They may plant their feet (or whatever passes for such) in the ground, attracting vermin like bees and flies, exhaling toxic spores and hypnotic pollen and sucking out the water and nitrogen and fertilizer from its surroundings.

These creatures often possess a taste for flesh, human or otherwise. In other cases, all they care about is laying down their roots, overgrowing and infesting the land and starving the ecosystem of its own resources. If it grows fruit, it probably imbues those that eat it with supernatural abilities before they explode from the alien parasites that germinated in their intestines.

Note: Fungi are not plants, and in fact are more closely related to animals, but fiction still treats the two groups as interchangeable often enough for them to fit here. 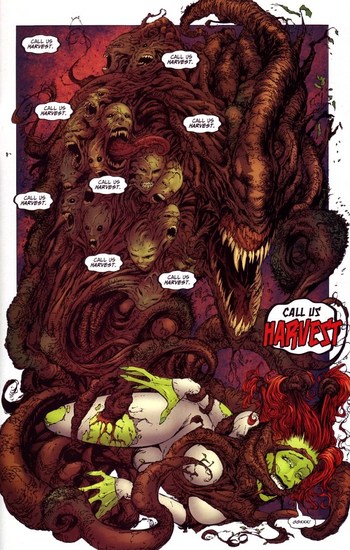 This is why your parents want you to eat your spinach. Or else they come to life and try to eat you.
Fan Fiction
Films — Live-Action
Literature
Live-Action TV 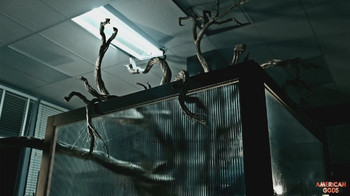 "There's always been a god-shaped hole in man's head. Trees were the first to fill it. Mr. Wood was the trees. Mr. Wood was the forest. Well, he was a very old god who saw something very new: he saw a god-fearing society turn towards complete industrialization. So what did he do? He sacrificed his trees. He sacrificed his forest. And he became something else."
Mythology
Playing With
Basic Trope: The Eldritch Abomination is a plant or fungus.
Tabletop Games
Toys
Trope Co&reg 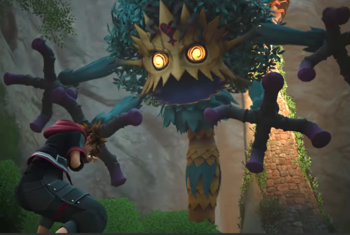 Hey kids, do you struggle all summer to make your garden, only to have nothing to show for it? Do the guys your parents hire to mow the lawn always end up killing it by accident? Well, fret no more!

Introducing the brand-new Trope Co.® Botanical Abomination™! Simply plant one of the Trope Co.® Botanical Abomination Insta-Seeds™ and watch it grow overnight. It can survive any environment! Plant it in the middle of the forest and it will tower over all of the other trees and releases mind-control pollen from its flowers. Is your garden in the Western countryside suffering? Plant a seed and watch as an Alien Kudzu sprouts and strangles half the country-side with its carnivorous, viney-goodness. Plant it in the desert and watch it become a massive Sand Worm with massive thorns across its body and can survive without water for months. Drop it in the ocean and watch it rise from the water as a colossal seaweed Kaiju. The fisher-men all over the coast will thank you immensely for the easy catch when its mere presence kills all of the fish near it. Even the moon isn't sa— I mean even in the airless vacuum of space is the perfect place to cultivate your Botanical Abomination™ as it grows into a blood-sucking Meat Moss that assimilates your friends and family into an amorphous monster. Next year's family reunion will be so much more interesting now!

The Botanical Abomination™ is both house-plant and family pet!