This page covers both Athena from the original and her descendant, Athena Asamiya of Psycho Soldier and KOF fame. 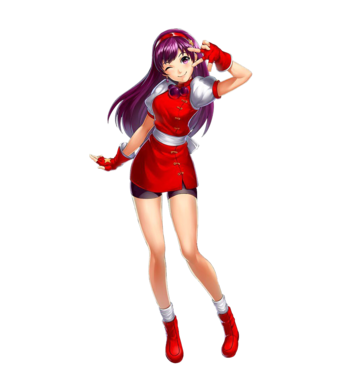 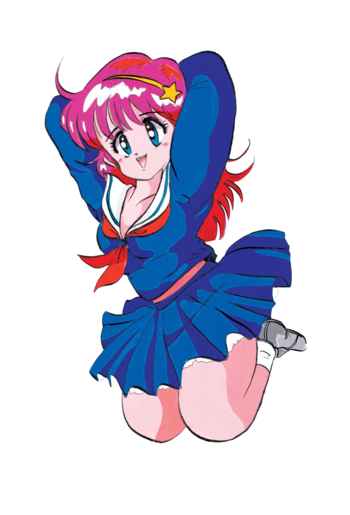 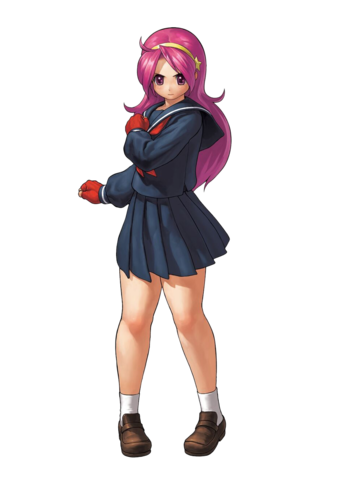 Click here to see her in KOV XIV and SNK Heroines 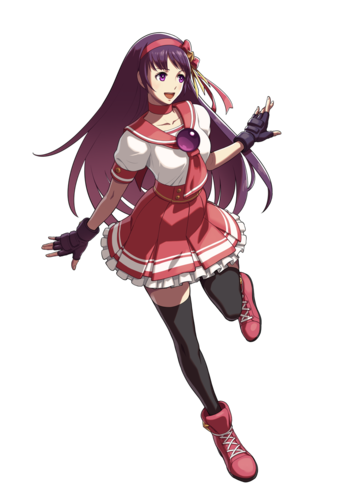 "Sorry about that! Are you hurt? I guess I got a bit carried away!"
Voiced by: Reiko Fukai ('94), Moe Nagasaki ('95), Tamao Satou ('96), Yukina Kurisu ('97, The King of Fighters: KYO), Haruna Ikezawa ('98 onward, The King of Fighters: Destiny), Robyn Gryphe (Maximum Impact, English), Lily Kong (Maximum Impact 2, English), Miwa Gardner (XII, English)
Advertisement:
The star of Psycho Soldier and one of SNK’s mascots (a spot shared with Goddess Athena); Athena Asamiya is a bright and cheerful young girl who was born with Psychic Powers, dubbed in-verse as Psycho Powers, for she is a descendant of Goddess Athena and possibly her Reincarnation due no other member of the Asamiya Family ever possessing special powers before Athena.
For being a special girl Athena was taken in by Chin Gentsai as one of his disciples, initiating a team of fighters who are gifted with psychic powers, molding them to be prepared for any threat the world may face, to be defenders of justice; Athena has a strong sense of righteousness, so she fits right in.
Athena’s trademark characteristic, that is being a Japanese Idol Singer, has its origin in ’97; Athena and Kensou’s charisma and notable prowess in martial arts has been earning them fans since ’94, but this rise in popularity made Chin become worried about his disciples losing their humble spirit and lose focus on being heroes, with that he tried to talk them off participating in the ’97 tournament, meanwhile Athena has received a letter from a fan, an ill-girl who wrote a heartwarming letter to the Psycho Soliders, saying they are her source of inspiration to overcome her illness, she hoped to see them again in action for the ’97 tournament.
Advertisement:
Athena felt she had to answer such a devoted fan, she shows the letter to Chin, convincing him to follow his disciples and see how they take being popular and also being defenders of justice; Athena, Kensou and Chin didn’t win that tournament but still did great nevertheless, at the end the team is surprised by the visit of a wheelchair bound girl, she is Kaoru Watanabe the ill-girl who sent that letter prior the tournament, Kaoru introduces herself and congratulates Athena in doing well again at KOF, she says the team gave her strength to also fight hard, Kaoru gets up from the wheelchair trying to show her progress by walking, she stumbles but before falling Athena hurries to her side and supports Kaoru, with that Kaoru asks Athena if she could be their friend, Athena and the team gladly become friends with Kaoru.
Advertisement:
Showing that at the end of ’97 made Chin reevaluate his students, thinking he was wrong about them, now feeling Athena and Kensou have their hearts in the right place; Athena tells her master that being popular and a good source of inspiration also is one way of helping others, with this Chin loses all his worries about his disciples losing their way. This eventually develops into Athena becoming an Idol, extremely popular and inspiring all, but still being a hero of course.
The other part of Athena’s character is being on the receiving end of Kensou’s long lasting romantic feelings, he tried to confess to Athena multiple times, sometimes succeeding in expressing himself (many) other times not, Athena’s reaction is mostly always the same, that is getting embarrassed and dodging an answer; while what she really feels about Kensou may not be love, she does think well of him as a great friend, always sticking with him.
In XIII during a conversation with the Women Fighters Team, upon seeing that Mai, Yuri and King all have a special someone in waiting, Athena hopes one day she will find her other half as well, Kensou immediately tries to say she already has him, Athena gets embarrassed and scolds Kensou, telling him not to say it in front of so many people.
In the CD Dramas from ’96 to ’99, it is shown that Athena has one-sided feelings for Kyo goes to great lengths to move to a place near the Kusanagi household. In other SNK media, Athena’s feelings for Kyo have never been shown, not even hinted in the games proper, raising a case towards its actual place in canon.
Athena Asamiya Tropes
"I am the original heroine of SNK. I'm sorry..." 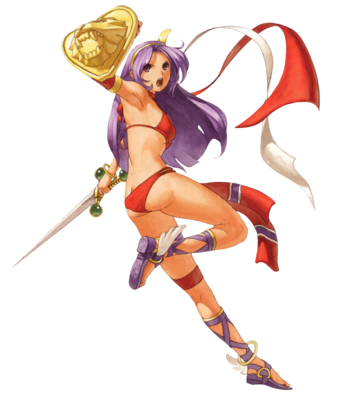 The Hero of the arcade title, Athena. Athena is the rebellious princess of the Kingdom of Victory, residing in the heavens. Bored with her uneventful day-to-day life in the castle, she yearns to go on exciting adventures. One day, she opens the "Door Which Shouldn't Be Opened" in the basement of Castle Victory, and is trapped in another realm called "Fantasy World".