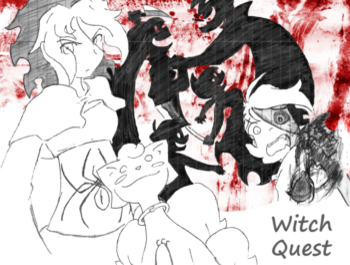 Not exactly a happy quest.
Advertisement:

is a Puella Magi Madoka Magica quest run on SpaceBattles.com by Chibi-Reaper

, a healing-type writer. Readers vote on the actions that Rochelle, the sane Witch Of Regret, will take.

Rochelle is a Giant Spider Witch who, for reasons unknown, is both sane and has been caught up in Homu-Napalm's time loops. After being killed off a few times after the readers saw the quest as a comedy series, people began to take it seriously and started to earnestly try to get a good ending for everyone. Unfortunately for Rochelle, not everyone takes kindly to random spanners being thrown into their plans, and so Rochelle finds herself having to stay alive while trying to help everyone, despite Napalm's constant attempts to kill her, Walpurgisnacht's deadline and the Cosmic Deadline of Madoka's canon wish. Oh, and Kyubey wants to do SCIENCE on her to find out what makes her tick.

The quest ran for a year before being abandoned in 2013.