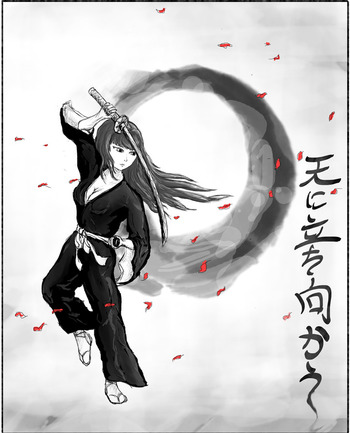 To Stand Against Heaven
The dead do not rest easily.
Advertisement:

We Stand in Awe... is a Bleach Quest roleplay run on Sufficient Velocity.com by the illustrious Maugan Ra.

The starting premise is as follows - you are a new shinigami of the Gotei 13, freshly graduated from the Academy. The quest was originally designed to follow the player character until they either became a champion of Soul Society or got horribly eaten by a Hollow.

The players start off as Makoto Kobayashi, a talented but by no means exceptional shinigami who possesses the dream to one day 'Transfix Creation' - that is, have all of the world stand in awe of her.

Things did not go as planned.

Featuring a two-thousand year old conspiracy, certain elements of moral ambiguity but remaining true to its shounen roots, it can be read here

In October 2017, the quest was confirmed dead by Maugan Ra.

We Stand In Awe contains examples of: