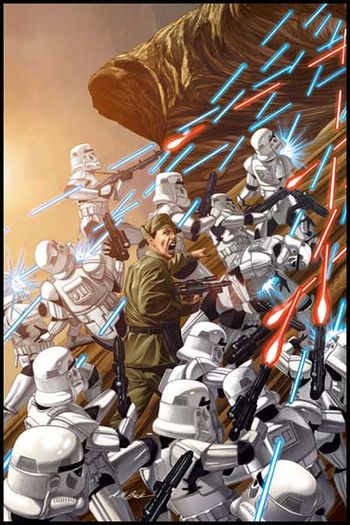 Another day at work.
The Empire is dead. Long live the Empire.
Advertisement:

The Vast Empire is an online group of Star Wars fans, writing fiction set in a modified version of Star Wars Legends where the Player Characters comprise a splinter faction of the original Empire known as the Vast Empire. The heroic Stormtroopers of the Vast Empire fight the terrorist forces of the New Republic and other Imperials, such as those led by Grand Admiral Thrawn. Consisting of a handful of scattered worlds and a fairly small fleet of warships, the Vast Empire and its shadowy leaders nevertheless have grand ambitions, centered at Imperial Center itself...

, and the actual stories are here

Most of the active membership base of the Vast Empire has moved to a new site: Empire's Edge.