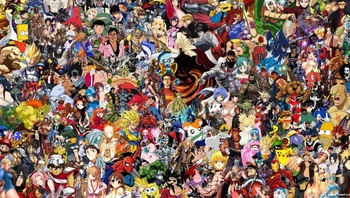 Just as big as before, and still growing.

Ultimate Crossover Roleplay, or UCRP, is the direct continuation of Chatzy's Literate Multifandom Roleplay with the same characters, same plot, and same people (plus newcomers). Just like last time, it is a giant crossover roleplay room featuring works such as Star Wars, Gurrenn Lagann, Marvel (Both the MCU and the comics), and far more than what could ever be listed. Expect copious amounts of crazy crossover fight scenes, a fair amount of crack pairings, and plenty of memes.

The setting is that of Soliven

, a strange continent where magic, myths, and technology meet and collide. Already struggling with internal tensions, its people are now faced with the added challenge of dealing with the thousands of beings from other dimensions, and are scrambling to find a solution on how to regulate them. Meanwhile, the inter-dimensional travelers bring the conflicts and alliances they have built into a new, permanent home, with new, permanent consequences of their actions.

As of August 3, 2019, the room has moved from Chatzy to Discord, the link for which can be found here