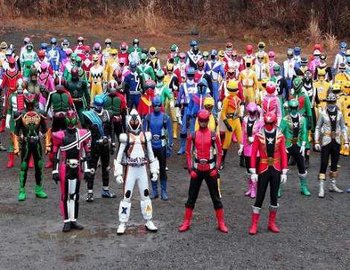 All ready to kick your ass into next Tuesday.

(originally based on the film of the same name) is a tokusatsu-based RPG, much in the same vein as Henshin Heroes, and it has a very similar setting. Unlike Henshin Heroes, Super Hero Taisen has so far had an episodic format, with only interactions between the characters linking the episodes of the roleplay together.

It has a lot more expansiveness with it's hero choices, allowing toku-like heroes from anime (namely from Tatsunoko works and Tiger & Bunny) to be played along with the more traditional selection of Kamen Riders, Super Sentai, Power Rangers, and Ultraman.

The game is defunct, though members have started a similar game with many of the same characters at Heroes' Carnival