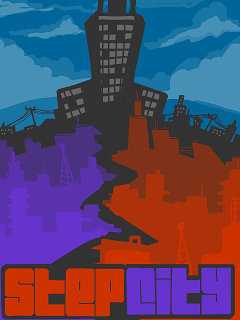 The teaser poster
"There is no good or evil, there is only groove"
— The original tagline

Step City is a Tegaki-e based Journal Roleplay set in an a world not unlike our own, just much funkier. The titular city was created by the S.T.E.P project for the purpose of monitoring the effects of mega radio waves on an large population. The tests resulted in super fly dancing fiends and super powered jive soul brothers. All residents of the city developed powers commonly called Vibe that are activated through dancing and singing. Highly proficient Vibe users are called Steppers.

The city is divided into two rival major factions, the Funk Mafia and The UG. There are two smaller factions as well: Roller Banditos and Squares.

This roleplay contains examples of: