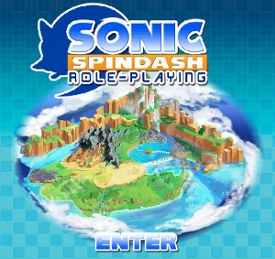 (often shortened to SSRP) was a forum-based roleplay based on... well, take a wild guess, with an exclusive focus on the game canon. The final iteration of the SSRP, started in March 2010, concluded a ten-year-running series of Sonic RPs.

Heavily story- and character-based, with an emphasis on adventure, storytelling, and continuity, the pace was slow but of remarkably high quality. Original characters were welcome throughout its run, and were actually more heavily featured than the canon cast.Hey, wait, don't run away just yet— there's strict quality control, with none of the kind of OCs that the Sonic fandom is known for making it through the application process.

Altogether, a stylish, if somewhat slow-paced Sonic play-by-post game, with a close-knit collection of members; the forums are here

, and the wiki, containing all of the rules and profiles and other such things, is over here

SSRP was shut down in September of 2012. While it's safe to say that most of those involved were just plain tired of continuing a Sonic RP after so long, it was ultimately a two-year-running betrayal of trust by a core member with bothersome interests in commissioned art of other people's characters that left a bad taste in everyone's mouth.

This roleplay contained examples of: