"Hey, I'm not down yet! Just gotta... pick up my entrails, is all!"
- the inimitable Ellis Nineveh on Sky—er, his battle wounds. 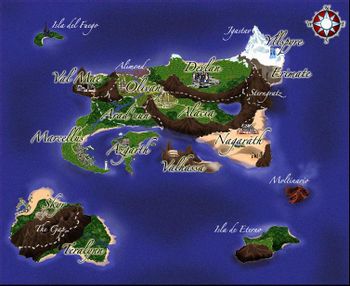 The World of Skylessia, circa Gen I.
Skylessia is an original (and currently defunct) Play-by-Post Game based on the popular Turn-Based Strategy game series Fire Emblem. It is one of two games hosted by Fire Emblem Planet (FEP), a fansite for Fire Emblem. It has had two incarnations before the current RP; The Elibe RP (not to be confused with the "Radiance of Elibe" RP on the same website), a fan RP based on the world of FE 6 and 7, and the Wardea RP, which was the first to create an original world while retaining influences from the games, particularly the GBA titles.
Advertisement:

It's second incarnation is the mostly-Post Apocalyptic, growingly Steampunk world of Skylessia, which consists of a vast continent with a number of outlying islands, as well as the new, unexplored island of Teraskyrn. After "Generation I" ended, there was an invasion by the Legions of Hell. After the invasion ended, the world restructured as a series of brand new nations. Alimond, a highly militaristic state founded by Kraid Kaflar, it's currently the most technologically advanced state, and maintains a fleet of Airships; Araducia, a nation in the middle of a civil war that borders the Deadzone; The Deadzone itself, a land infested and controlled by the invading demons; Marcellus, a rich merchant oligarchy, and one of the few states that survived basically intact from the demonic invasion; Nagarath, a desert theocracy that borders the deadlands; The Northern Territories, an area filled with feuding factions; Sk'harrah, a land ruled by Manaketes, currently undergoing some minor internal strife; Teraskyrn, the mostly unexplored continent to the east; The heavily isolationist Valhassan Empire; and the Wilds, an area held by five feuding bandit queens.

Over the years, other roleplays have also came and went on FEP; Radiance Lost and Radiance of Elibe, also Fire Emblem-based roleplays taking place in Tellius and Elibe, respectively; Shin Megami Tensei: True Will, obviously based on Shin Megami Tensei; Akanea RP, another Fire Emblem roleplay using a d20 system; and Rinia, which took place in an original world and had no real ties to any work of fiction.

Currently, Generation I and Generation II have ended, and Skylessia as a whole has been retired for now. A new roleplay, based on Elibe and titled Fire Emblem: Insurrection, has taken its place for the time being.

The archives for Skylessia and other roleplays can be found here

. The current incarnation can be found here