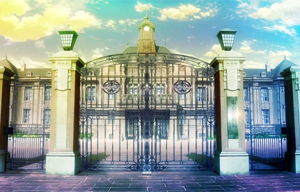 Ryugu Academy is a roleplay that began construction on March 15, 2014 and has been subsequently worked on. The intent of the roleplay was to reunite all of the old Raishonettes after Raishon Academy went down under. There is no official thread as of yet, and the project is a long ways from coming to fruition. Scheduled to open in one year.

Ryugu Academy takes place in the year 2015. The secret world of mythical creatures has introduced itself to mankind, though they were already very much integrated into their society to serve their own agenda. However, with this revelation came something more startling - the idea that there were private 'academies' funded by circles of investors, devoted to training these creatures, as well as their hybrid offspring, to fit in with mankind. At the current moment, only three academies have unveiled themselves to be such schools, offering admission to humans in hopes that one day, peaceful co-existence could be achieved. Ryugu Academy, in particular, went as far as to offer scholarships that paid for everything to human students. They received 24 applicants, all of whom were accepted and made into their own class.

In truth, Ryugu's reasons were a bit more than the altruistic statements would have led one to believe. The Headmaster, who's power was to give others powers, had planted special technology inside each student meant to replicate the internal changes that took place whenever he gave someone a power. Each student would receive two, and were looked after by an adviser who would report details if any other changes occurred. While this was going on, students noticed that their 'human' counterparts had special abilities like them, and began to spread rumors about them.

Things got worse when, you know, all 24 of them vanished out of the blue. Though, by then, Ryugu already had a lot going against it, such as monsters attacking the school that students were threatened to keep quiet about, students who transferred out never being heard from again, and the occasional death here and there.

Another set of mysterious students have been invited to the school, seen all around as replacements to the missing twenty four. Several groups have gathered around to help the school out - the Knitting Club, who researches in secret about the missing students and the new students, the Black Battler Club, a fraction of the Battler Club that goes monster hunting, and the Security Council, which keeps students safe whenever a monster penetrates the school walls. The induction of the new student set seems to kick off a series of strange and shocking events that will occur on Ryugu-jima, as well as the resulting panic, romance, heated confrontations, and insanity.